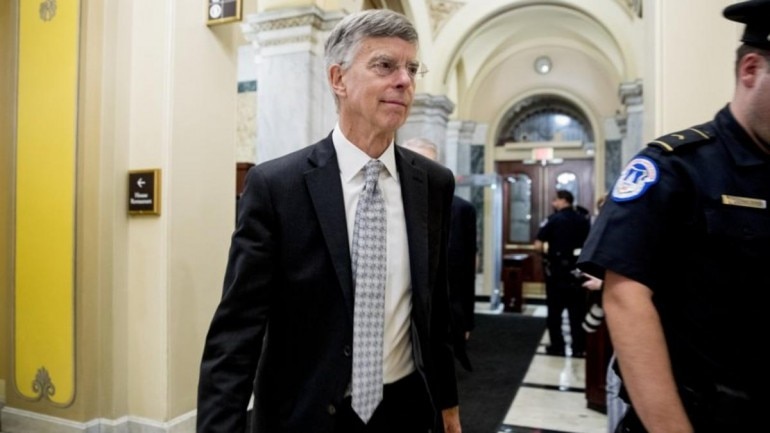 A secret cable. A disembodied voice. A coded threat.

William Taylor, a career diplomat, went behind closed doors in the basement of the Capitol on Tuesday and told a tale that added up to the ultimate oxymoron – a 10-hour bureaucratic thriller.

His plot devices were not cloak and dagger, but memos, text messages – and detailed notes.

His testimony was laden with precision – names, dates, places, policy statements and diplomatic nuance, not typically the stuff of intrigue. But from the moment Taylor revealed that his wife and his mentor had given him conflicting advice on whether he should even get involved, the drama began to unfold.

The mentor won out – or the story would have ended there.

Instead, on June 17, Taylor, a West Point graduate and Vietnam veteran, arrived in Ukraine’s capital of Kiev as the chief of mission. He had been recalled to service after the US ambassador to Ukraine had been forced out. That alone offered foreshadowing of troubles to come.

And, soon enough, Taylor said in his written opening statement, he discovered “a weird combination of encouraging, confusing and ultimately alarming circumstances.”

The story Taylor related from there amounted to a detailed, almost prosecutorial, rejoinder to White House efforts to frame President Donald Trump’s actions in Ukraine as perfectly normal and unworthy of an impeachment investigation.

With each documented conversation, he made it harder for the president to press his argument that there was no quid pro quo in which he held up military aid to advance his political interests.

Over three months, Taylor told legislators that he fought his way through a maze of diplomatic channels and rival backchannels as he tried to unravel the story behind the mysterious hold-up of $400 million in US military aid that Ukraine desperately needed in order to defend itself against Russia.

First came mixed signals about whether Donald Trump would follow through on his promise to invite Ukraine’s new president, Volodymyr Zelenskiy, to meet with him in the Oval Office.

Taylor was told by other US diplomats that Donald Trump needed “to hear from” Zelenskiy before the meeting would be scheduled. And that Zelenskiy needed to make clear he was not standing in the way of “investigations.”

Next, Taylor wrote, there was “something odd” Gordon Sondland, a Trump ally and US ambassador to the European Union, “wanted to make sure no one was transcribing or monitoring” a June 28 call that the diplomats made to Zelenskiy.

Soon enough, Taylor was detecting that Zelenskiy’s hopes of snagging the coveted Oval Office meeting were contingent on the Ukrainian leader agreeing to investigate Democrats in the 2016 election and to look into a Ukrainian company linked to the family of Trump political foe Joe Biden.