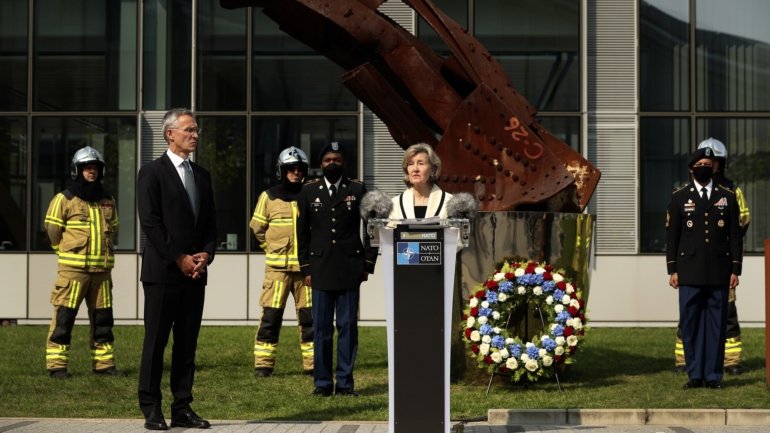 NATO Secretary General Jens Stoltenberg and US Ambassador to the Alliance Kay Bailey Hutchison on Friday paid tribute to the victims of the September 11 attacks in the United States 19 years ago, who killed 2,977 people.

The tribute took place at the organization’s headquarters in Brussels, in front of the monument to Article 5 of the Atlantic Alliance Treaty, which enshrines the principle of collective defense, that is to say a attack on one of the members is considered an attack on everything.

We are here because 19 years ago a series of terrible events changed everything, changed us as individuals, as a nation and as an Alliance, ”said Kay Bailey Hutchison.

Referring to the aftermath of the attacks, when NATO invoked Article 5, Hutchison underlined the Atlantic Alliance’s commitment “to defend freedom, democracy, human rights and the law” with its allies.

The representative of the United States to NATO also referred to the crisis caused by the Covid-19 pandemic, believing that she “had introduced a new enemy” which affects all allies and stressing the role of the military of the Alliance “in the distribution (of equipment and drugs). ), patient transport and construction of hospitals ”.

“The threats are less and less visible, but more and more dangerous,” the ambassador said, adding that the Alliance is adapting to continue to protect security and allow the future to be faced together.

Jens Soltenberg, for his part, recalled “the suffering and loss” of the nearly 3,000 dead in the attacks, as well as “the courage of those who died to save the others”.

“We are closer than ever to peace,” he said, referring to negotiations between the Taliban and the Afghan government which begin on Saturday. These discussions represent “a historic opportunity that must be seized,” he said.

The ceremony symbolically included a minute of silence at 2:46 p.m. local time (1:46 p.m. in Lisbon and 8:46 a.m. on the east coast of the United States), when the first plane crashed into the North Tower of the World Trade Center in New York City in 2001.

Words are not followed by action: Cyprus blocks EU sanctions on Belarus – politics