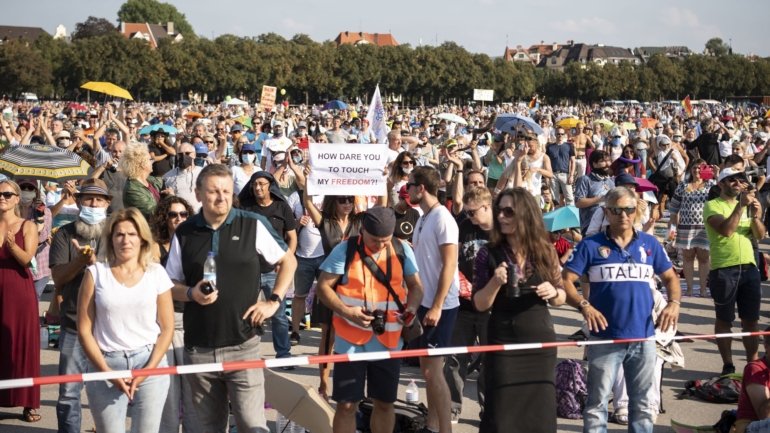 Thousands of opponents of restrictive measures to contain the spread of the new coronavirus demonstrated this Saturday in several cities in Germany, very few wearing masks.

In Munich, a national demonstration succeeded in bringing together around 10,000 people, according to the tally of the security authorities, more than the 5,000 planned by the organizers.

The demonstration had to be stopped, an hour after its start, because the rules of social distancing were not respected and because the participants did not use masks.

Other German cities have also welcomed the protests, such as Hanover, where at least a thousand people marched through the streets, or Wiesbaden.

As in the beginning and end of August, during which large demonstrations brought together tens of thousands of people, many of the opponents of the Berlin restrictive measures who marched on Saturday were not wearing masks.

“I am against these anti-coronavirus measures, because several virologists are not being heard, in the face of very biased media coverage,” said Uwe Schnetter, one of the protesters who has walked the streets of Munich today.

“We don’t have a basic law (the Constitution), but rather a law that protects against infections. And, under the cover of this law, all fundamental freedoms are suppressed, ”said another protester, who wore a shirt from the Maverick Thinkers Movement.

This movement, born in Stuttgart, has organized numerous demonstrations against the restrictive measures and its supporters are a heterogeneous mix of genders, ages and political colors.

German Chancellor Angela Merkel said today that she understands that some people suffer from the restrictions imposed, explaining that “everyone is free to openly criticize the decisions of the government (…) as long as they do so peacefully”.

“It is a great asset of our State, which does not suppress freedom of opinion, public debate and participation, but guarantees them. This is why our country is envied, ”said Merkel.

Anandtech: The M1 processor would actually be more powerful than the Intel Core i9

Nuclear waste back in Germany: Castor transport has arrived in Biblis, Hesse – politics

Against the devastation of urban centers: How Altmaier wants to turn inner cities into “adventurous spaces” – the economy