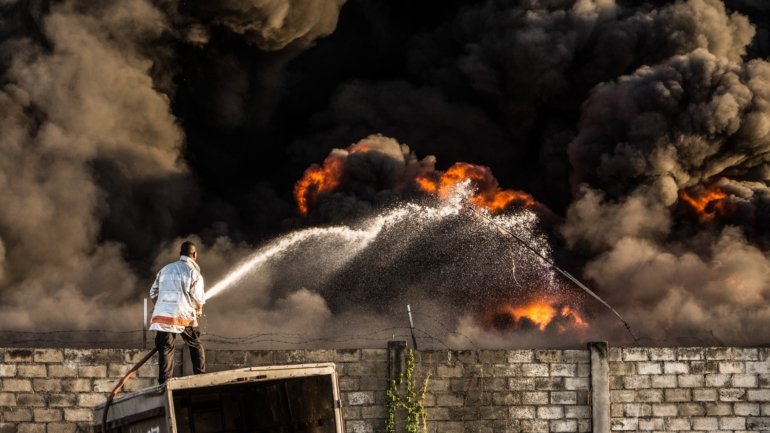 At least one person was injured in a major fire on Sunday afternoon at a warehouse of machinery, tires and other materials in the western part of the Timorese capital Dili.

The fire in the Bebonuk area, which emitted a thick, toxic cloud of black smoke visible from all over the city, started, according to preliminary reports, with an electrical problem.

The flammable materials, including tires, paint and diesel, escalated the flames which reached the height of electrical wires, then spread to another nearby warehouse where medical supplies and equipment were located.

The fire, which affected power lines, caused power cuts that will continue for several hours in this part of the city. Despite the efforts of the Timorese firefighters, the fire took several hours to be brought under control.

The shortcomings of the civil protection sector, including firefighters, are evident in disasters like these, where human and technical resources are insufficient.

Small tankers, bad pipes – with large holes and leaks – and a lack of protective gear made fighting the flames especially difficult.

Fighting against the fire only improved after the arrival of a foam tank from the Indonesian oil company Pertamina, which has its fuel tanks close to the area.

Claudio Silva, commander of the Timorese fire brigade, deplored in statements to Lusa the lack of conditions in the institution, explaining that the fight against the fires was only possible because many companies lent their tankers. “We urgently need the right equipment and vehicles. This fire is very important and we were only able to check the reasons why the water and construction companies came to help with their water tanks, ”he explained.

According to him, more than 10 vehicles from various companies joined the firefighters in fighting the blaze, which was only brought under control a few hours later. “We are now working to control and prevent re-ignition and so that it does not move on to other structures,” he said.

With the demographic growth and the absence of any town planning, the network of the city of Dili is today confronted with high risks of fires of this type, with warehouses, including of dangerous and flammable materials, in the middle of residential areas.

Poor electrical systems and other storage problems exacerbate the risks in a city where much of the housing is still precarious.

Equally evident in the fight against the fires was the lack of an integrated disaster response structure, which took several hours before the arrival of police and an ambulance.

The injured man, who was taken to the scene unconscious, had to be taken to hospital in the back of a small open-top van.

How do Florida, Georgia and Co. ?: So it’s in the decisive swing states – politics

With Chrome 86, Google is committed to protecting its users