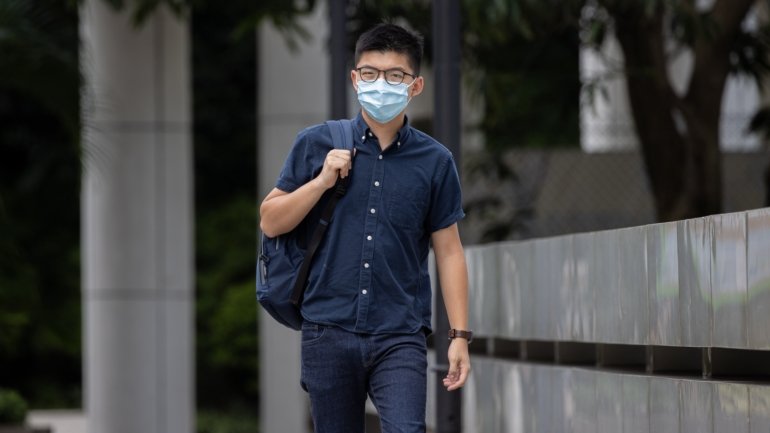 Activist Joshua Wong told the Portuguese News Agency on Thursday that Portuguese authorities have the right to visit the young Hong Kong student of Chinese and Portuguese nationality detained in China.

For Joshua Wong, 23, a leading figure in the pro-democracy movement, who was nominated for the Nobel Peace Prize in 2018, “what makes the situation so dire is that they (the 12 detainees) are in prison and disconnected from the outside world ”.

On August 23, 12 pro-democracy activists were arrested by the Chinese Coast Guard on suspicion of “illegal crossing” while sailing by boat to Taiwan, where they allegedly sought political asylum.

Among the detainees is Tsz Lun Kok, a 19-year-old student at the University of Hong Kong (HKU) with dual Portuguese and Chinese nationality.

“God only knows how the Chinese authorities treat them in detention,” Joshua Wong said.

The Portuguese Foreign Ministry as well as the Portuguese Consulate General in Macao and Hong Kong said they were monitoring the young man’s case with a Portuguese passport, noting, however, that “China does not recognize dual citizenship for Chinese citizens. “.

A situation which would limit the intervention of the Portuguese authorities in the “humanitarian field, seeking to ensure that the detainee is well, that he is treated with dignity and that he can be defended by a lawyer”.

Family members of the group of detainees in China on Saturday demanded to be allowed to send medicine or just talk to detainees, urging authorities to allow them access to lawyers and return to Hong Kong.

A day later, police in Shenzhen, the city where the group is still being held, issued an official note on the case, guaranteeing that the usual execution measures have been taken and that all legal rights are guaranteed to the people. suspected of illegally crossing the border, when they tried to reach Taiwan on a speedboat.

The Chinese judicial system provides for the use of< surveillance résidentielle dans un lieu désigné >>, which allows the authorities to stay in an unknown location accused of< mise en danger de la sécurité nationale >> for a maximum period of six months, without having access to a lawyer or contact with family members. , a form of detention that often targets human rights defenders, including lawyers, activists or dissidents.

The young man with a Portuguese passport had already been arrested on November 18, along with hundreds of other students, during the police siege of the Polytechnic University of Hong Kong (PolyU), which ended in the invasion security forces on the university campus, where police claim to have found thousands of firebombs and weapons.

The young man is accused of rioting in Hong Kong for allegedly participating in a maneuver to distract police from surrounding campus facilities in an attempt to allow refugee students to escape the countryside.

The former British colony has gone through the worst political crisis since the transfer of sovereignty to the Chinese authorities in 1997, with protests that led to the arrest of more than 9,000 people.

In June, Beijing’s response to protests that dragged on a year ago in Hong Kong came with the imposition of a national security law in China’s Special Administrative Region, prompting activists to withdraw. refugee in the UK and Taiwan.

This law punishes subversive activities, secession, terrorism and collusion with foreign forces with penalties of up to life imprisonment.

Covid19. UK decision is neither correct nor objective, says Minister of Economy – Observer