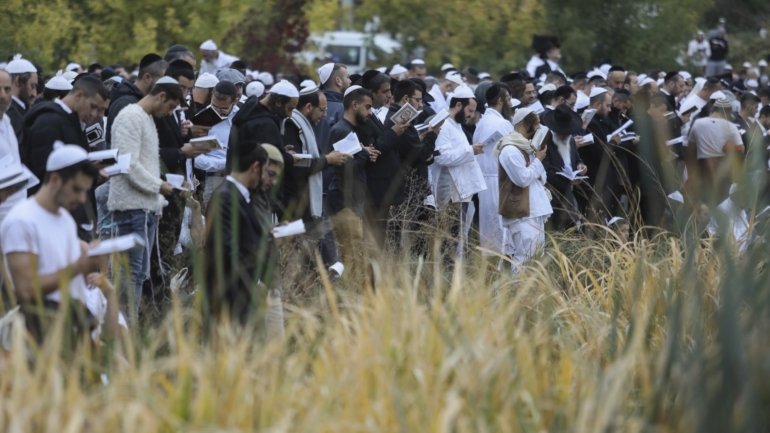 Hundreds of Jewish pilgrims stranded for days at the Belarus-Ukraine border due to measures against the covid-19 pandemic are withdrawing, renouncing their pilgrimage to Ukrainian territory. “If yesterday (Thursday) there were 1000, this morning at 10 am (7 am in Lisbon) there were no more than 700” at the border post of Novi Yarylovychi, the spokesperson told France-Presse. word of Ukrainian border guards Andri Demchenko.

His Belarusian counterpart Anton Bychkovsky confirmed “that the number is decreasing”.

Every year on the occasion of the Jewish New Year, which this year takes place between Friday and next Sunday, tens of thousands of pilgrims gather in Uman, central Ukraine, at the tomb of Rabbi Naham in Breslev. (1772-1810) founder of the ultra-Orthodox branch of Judaism (Hasidic). The abandonment of the first pilgrims close to the border was due to the New Year celebrations which began at dawn.

Hasidic Jews intended to enter Ukraine by land via Belarus, but restrictions by Kiev authorities against the spread of the SARS CoV-2 pandemic have barred foreigners from entering since the end of the year. August. In total, it is estimated that around 2,000 Jewish pilgrims, mostly residents of Israel, traveled to Belarus, where they tried since last week to cross the Ukrainian border from Novi Yarylovchi.

The groups of pilgrims remained in the “no man’s land” between the two border posts in precarious conditions and it was necessary to distribute food, water and set up camp tents.

The border situation has sparked diplomatic tensions between Ukraine and Belarus, with Kiev accusing Minsk of helping to cover up the internal Belarusian political crisis, sparked by the protests following the August 9 elections, viewed by the opposition as fraudulent. .

The Ukrainian presidential office called on the Belarusian authorities to stop “exacerbating” the situation at the border and to stop “making false statements giving false hopes to pilgrims about the opening of the border”.