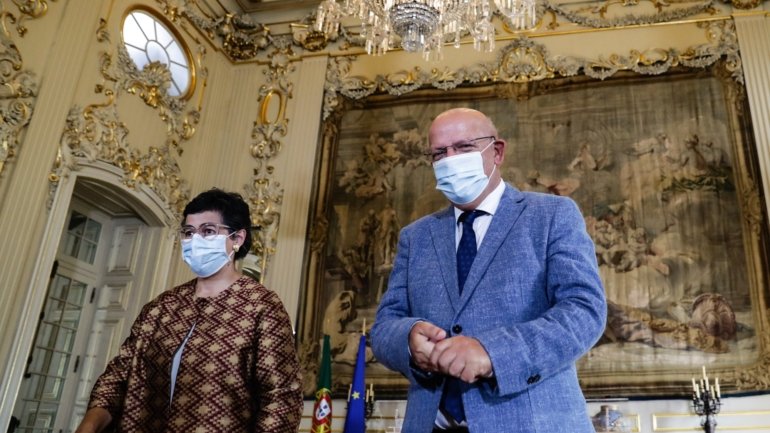 Portugal and Spain consider that the current situation of the pandemic is different from that recorded in March, justifying surgical and specific measures, and will not close the common borders, indicated the heads of the diplomacy of the two countries this Friday at Lisbon.

The current phase of Covid-19 and the prospects for the next Portuguese-Spanish summit, which will take place in the city of Guarda on October 2-3, dominated the press conference by Augusto Santos Silva and his Spanish counterpart Arancha González Laia , in Lisbon, which, during their working meeting, also addressed various subjects of the European agenda and international issues.

“No”, replied Augusto Santos Silva about a possible closure of the common borders. “It is not by closing ourselves off that we are going to solve this common problem that we have, the pandemic.”

On the contrary, it cooperates between us and does what we have to do at the level of public authorities, by maintaining and increasing the response capacity of our health systems and by raising awareness among our fellow citizens, because this fight against the pandemic is won with everyone’s contribution and effort ”, defended the head of Portuguese diplomacy.

A position corroborated by Arancha González Laia, when she insists that the situation in Spain and Portugal is not an exception, but the rule, and reveals that at this stage there is a high rate of infections asymptomatic people, posing new challenges.

“The outbreaks that are occurring in Spain and Portugal are the same as we have seen in France, Italy, Austria, the Netherlands, the UK and, therefore, are no exception, they are the rule, ”he said.

“Our responsibility is to manage them. In Spain, more than half of those infected are asymptomatic, which gives an idea of ​​the country’s effort in terms of testing (…) and that the surgical isolation of citizens who test positive should be imposed ”, declared the Minister Spanish.

The head of Spanish diplomacy has also ruled out the closure of borders in this new phase of the virus and has defended a “surgical” response, to prevent new outbreaks in several European countries from becoming a problem for health services.

We must be able to treat and control and research this surgical treatment of the virus while maintaining a space of freedom in our economies, in our societies, so that our countries can continue to function and with large doses of social responsibility ”, he added. He underlines .

Arancha González Laia insisted on the fact that in Spain, the citizens are kidnapped surgically “because the country is not confined” and considered that the current situation was different from that recorded in March.

“With more specific and decisive measures, open borders, the freedom of movement of most of our citizens can be maintained and while protecting their health. (…). We will continue to manage this new phase of the pandemic, which, I insist, where our two countries are not the exception but the norm ”, declared the Minister.

Augusto Santos Silva also pointed out that, in the case of Portugal, the number of contagions is increasing, unlike people hospitalized or hospitalized in intensive care.

It’s a new reality. (…) It is very important to understand that we are all Europeans and members of the European Union. And, therefore, it is not a question of establishing differences or divisions between countries, ”he said, to call for an effort at European level through coordinated measures.

In a reference to the Portuguese-Spanish Summit on October 2-3, the Portuguese foreign minister admitted that the theme of economic cooperation and bilateral cooperation in this recovery “will be a central theme, if not the central theme” of this meeting of heads of government the two countries, and with a focus on cross-border cooperation.

“In the negotiations with the European Union, the reindustrialization of Europe will have two main protagonists in Portugal and Spain”, added the minister, after stressing that the two economies remain very integrated and dependent.

The Madrid counterpart reinforced this approach, stressing that the Summit “seeks to respond to the demands of businesses, citizens, autonomous communities, municipalities, on both sides of the border, who ask us to focus on the recovery economic and social after the crisis. “.

And when establishing the essential objective of the Summit, Arancha González Laia spoke of the impetus for a “cross-border strategy” to respond to the cross-border areas between Spain and Portugal.

In this time of post-covid crisis, this is when this cross-border strategy makes the most sense, in which we intend to visualize the commitment of our progressive governments that we are, to energize an economic recovery that leaves no one behind. aside and which focuses in particular on the most vulnerable areas. depopulated, those who have perhaps suffered the greatest economic impact from this crisis. Cross-border spaces that together we want to change in a very determined way to accelerate the economic and social transformation of our border regions ”, he said.

The heads of diplomacy in Portugal and Spain have not confirmed the resumption of rail links between Lisbon and Madrid, which have been interrupted since March, a subject which will also be discussed at the Guarda summit.

Covid-19: Detained in Brazil the health secretary of the suspected fraud in the purchase of tests