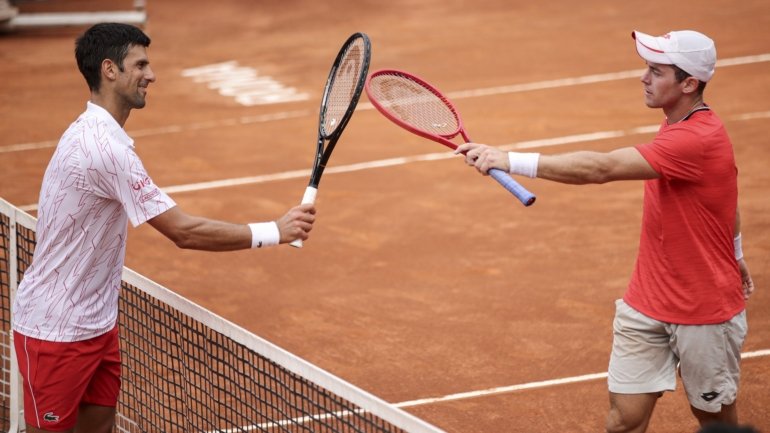 The leader of the ATP world tennis rankings, Serbian Novak Djokovic, qualified for the semi-finals of the ATP Masters 1000 in Rome on Saturday, in a match that highlighted his new lack of emotional control.

Less than two weeks after being disqualified at the United States Open, for having, in an untimely reaction, hit, unintentionally, with a ball by a linesman, the athlete again lost his temper during of the 6-3, 4-6 and 6-3 victory over the German Dominik Koepfer.

When, in the second set, he lost his serve and allowed 3-3, an angry reaction led him to strike the red clay with his racquet, damaging it irreparably and leading the referee to give him a warning. .

Djokovic already looked frustrated in the previous game, when he watched the referee question his decision to repeat a point.

On Monday, the leader of the table admitted to having learned a “big lesson” at the US Open and recognized that certain “explosions” are part of his “personality type”.

Djokovic, in search of his fifth title in Rome, will now face Casper Ruud, who knocked out local favorite Italy’s Matteo Berrettini 4-6, 6-3 and 7-6 (5) and became the first Norwegian to reach the semi-finals of a Masters 1000 tournament.

Nine-time Roma champion Rafael Nadal of Spain, second in the ATP standings, will face Argentina’s Diego Schwartzman in the semi-finals.

Although supporters have not yet been admitted to the tournament, Italy’s Sports Minister said on Friday that 1,000 supporters would be allowed to participate in the semi-finals and finals at the picturesque Pietrangeli stadium.

In the women’s tournament, champion Simona Halep, second in the WTA rankings, reached the semi-finals when Kazakhstan’s opponent Yulia Putintseva left the match with a lower back injury.

Halep, who lost two consecutive finals in Rome to Elina Svitolina in 2017 and 2018, will face Spaniard Garbine Muguruza, a two-time Grand Slam winner, who beat Belarusian Victoria Azarenka, vice-champion of the ‘United States Open 3-6, 6-3 and 6-4.

Covid19. Control system in Madeira detects 80% of cases directly at the airport

End of autumn holidays in Berlin: there are regular school activities – politics