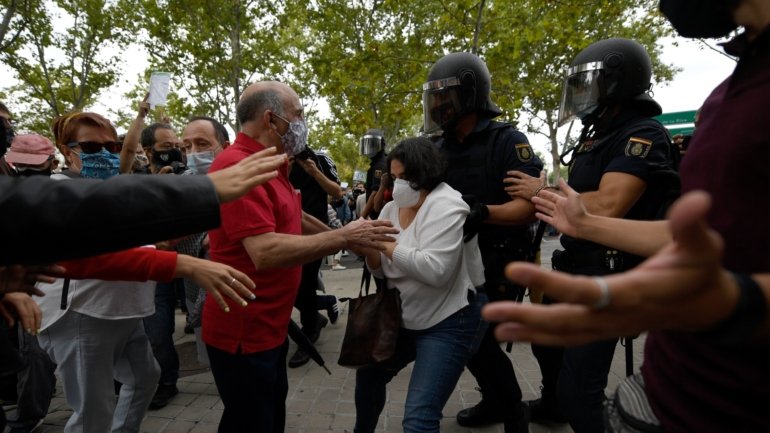 Hundreds of people took part in a wave of protests this Sunday in several areas of Madrid affected by the mobility restrictions, which will take effect on Monday. Measures which are expected to continue for at least two weeks and which will affect more than 850,000 citizens – 13% of the population of the Spanish capital – who live in parts of the city where there has been a greater increase in Covid cases -19.

According to El País reports, one of the biggest gatherings took place at the Community Assembly in Madrid and there were “moments of tension” with the police, which prevented people from trying to s ‘approach the building.

A charged atmosphere of Asamblea in Madrid. Several people face the police as the protesters are still waiting for the doors of the building. The agents, to a few reporters. pic.twitter.com/VyM1NmuAZJ

“This is not confinement, it is class struggle” and “these are our weapons” were some of the cries of people close to the Assembly.

In the neighborhood of Villa de Vallecas, hundreds of young people and adults demanded the resignation of the president of the autonomous community of Madrid, Isabel Díaz Ayuso – who imposed the restrictive measures – and shouted “less police and more health “, we read in El Mundo.

For the demonstrators, the measures applied to the poorest districts of Madrid are “discriminatory and inefficient” and require a greater investment in the districts, as well as an increase in public transport. Demonstrations also took place in Villaverde Alto, Villaverde Bajo, Carabanchel, Arganzuela, among others.

These protests follow a call by the Federation of Residents’ Associations of Madrid, via social networks, for “peaceful” protests where “health security measures and social distancing” must be respected at all times. For 7 p.m. (8 p.m. in Lisbon), new events are planned in the Usera and Latina districts. On Friday, there was a rally in Porta do Sol also to protest against the measures announced by Ayuso.

Covid. 5 reasons Madrid are on the verge of collapse

In the 37 health zones where mobility restrictions will be enforced, people will be able to go to work, take their children to school or go to the doctor and the limit of people in gatherings is six. The establishments will see their capacity reduced by half and will have to close at 10 p.m. Gardens and parks will be closed.

This Sunday, citizens living in these affected areas will be able to access the website of the Community of Madrid to access forms to justify their trip. The Spanish police will carry out random checks from Monday, but will only pay a fine in the next 48 hours, that is, in the first two days the checks will be for informational purposes only, read at El País.

Nigeria is not settling down: violence, chaos and looting in the metropolis Lagos – politics

A reason to prefer Trump to Biden – Observe