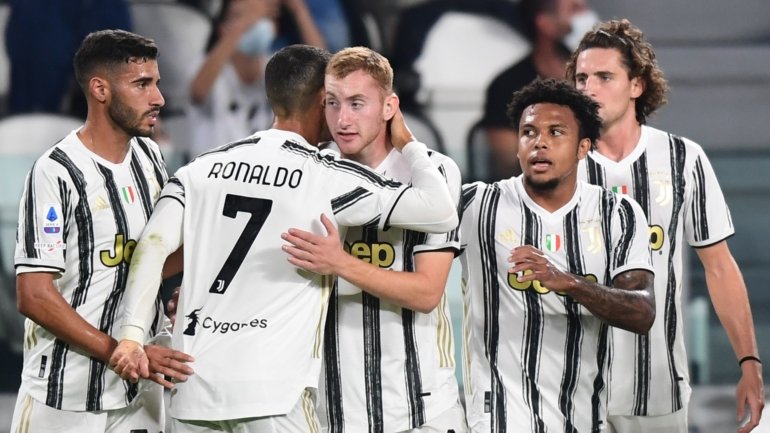 Nine days at the helm of the Under-23s of Juventus. When Andrea Pirlo was chosen to succeed Maurizio Sarri, following the Italians’ Champions League elimination at the hands of Lyon, the former midfielder’s record was nine days in charge of Juventus under 23 years. This Sunday, Pirlo made his debut as a team head coach. This Sunday, Juventus began their journey to the 10th consecutive title in Italy. This Sunday the Pirlo era in Turin began.

And the former Italian international surprised in the top eleven. At the Allianz Arena, against Sampdoria and without Alex Sandro or Dybala, both still recovering, Pirlo threw young Frabotta on the left. The 21-year-old left-back from Bologna arrived at Juventus Under-23 in 2019, made his main team debut still with Sarri and this Sunday was Pirlo’s bet as a starter. In midfield, Weston McKennie also played early – a 22-year-old American on loan from Schalke 04 – while Kulusevski started the attack, next to Cristiano Ronaldo. And the Swedish striker, who before the opening whistle showed the award for the best youngster of last season in Serie A, while he was in Parma already on loan from the Bianconeri, had already explained before the match to what point it was important to play close to Ronaldo.

“Cristiano is fantastic, I am lucky to be able to learn from him. He is very nice, he talks to everyone, even on subjects that have nothing to do with football. When you tell me something, it’s like gas to me. Help me be better at what I do. I am very, very lucky to be able to play with him. Hope to help you, ”said the 20-year-old forward in a preview of the reception at Sampdoria by Claudio Ranieri, who entered the pitch without goalkeeper Quagliarella in the starting XI.

In the game itself, it took a few minutes to figure out how Pirlo’s team was going to behave. Without the ball, Juventus designed a perfect 4x4x2, with Frabotta to the left of the defense, Danilo to the other side and the quartet Ramsey, Rabiot, McKennie and Cuadrado in the midfield, the former usually being the first pressure element of the midfield. the opponent. Further on, Ronaldo was the last man on the team, with Kulusevski being more mobile and moving closer to the rest of the sectors. During the attack, the model changed slightly. Frabotta took over the entire left aisle, Danilo, Chiellini and Bonucci were three times in the middle and Ramsey was sort of a “10” behind the two most advanced elements.

The game’s first dangerous shot came from Danilo, with a long-range effort that overtook Audero’s goal (6 ′). Cristiano Ronaldo first appeared soon after, with a left-footed shot that the Sampdoria keeper saved (11 ′) following a pass from Ramsey – and the Welshman was even the best on the pitch. Very intense in the midfield and with an above average vision of the game, always looking for the depth of the Portuguese player, it was Ramsey who passed all the ideas of Juventus. The first goal of the match ended up appearing even before the first quarter of an hour was over, in a somewhat natural way and via Kulusevski. Ronaldo was already disarmed inside the penalty area and the ball was left to the Swede, who from the first shot with his left foot crossed to beat Audero, making his official debut for the Bianconeri (13 ′).

Cristiano Ronaldo had two more scoring opportunities before the break – shot from the bar (24 ′) and shot down the side (24 ′), both from Ramsey’s pass – but Juventus did not change the result until the end of the first part. After losing possession of the ball and a bit of control after gaining the advantage, Sampdoria moved up the lines and tried to get closer to Szczęsny’s goal, Pirlo’s side recovered the witness of the match in the last moments of the first half. and ended up falling asleep a bit in the game.

The second half started with a triple change at Sampdoria – Quagliarella, Ramírez and Tonelli entered – and it was even Ranieri’s team that had the first chances, with a deviation from Bonazzoli on (52 ′) and a shot from Ramírez after a good job at the entrance to the penalty area (52 ′). On the other side, Pirlo only moved 25 minutes before the opening whistle, trading an already yellowish Frabotta for De Sciglio. The pace of the game was similar to that of the last moments of the first half and that was exactly what Juventus wanted. However, the impression remained that Pirlo’s team were gradually falling asleep, both on the attacking front and in the middle sector, which opened the door to the possibility of a Sampdoria surprise.

Ranieri certainly felt exactly the same and within minutes he threw two other players onto the pitch, Glass and Damsgaard. The clock was ticking, Juventus seemed happy with the result but there was at least one man dressed in white and black who wanted a lot more. Cristiano Ronaldo, who missed three chances in the first half and more in the second, looked at the sky and asked, fingers in hand, “one”. The Portuguese player just wanted a ball in to make his Juventus debut this season.

Until the end, Bonucci ended up scoring in a corner (78 ′), increasing the advantage, and Ronaldo managed to reach the first goal of the season in Italy (88 ′), with a very strong cross shot that does not gave Audero no chance. Pirlo’s Juventus era started with the first win of the season and the first three points in Serie A – towards the historic 10th Scudetto followed by the Bianconeri.