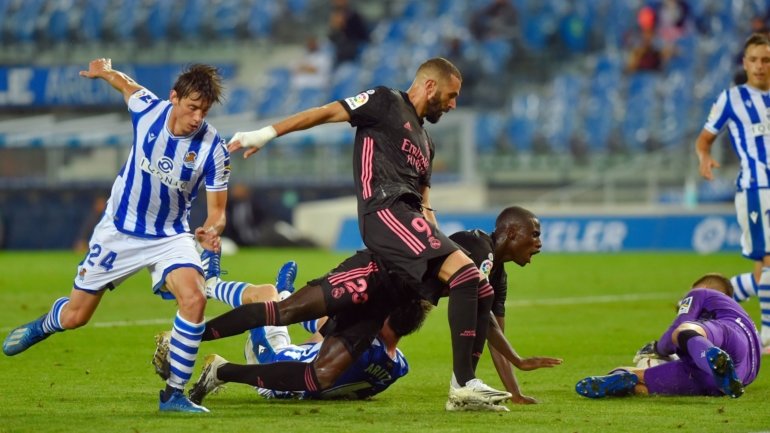 It was a dislocation that started troubled. Real Madrid should have arrived in San Sebastian, where this Sunday they made their Spanish league debut against Real Sociedad in the morning. But the entourage of 22 players, led by Zidane and the rest of the technical team, ended up being surprised by a breakdown in the plane that should have taken the club to the Basque Country. The solution was a change to a larger plane, which could only land in Vitoria, and a 95-kilometer bus ride to the designated hotel.

Result? Real Madrid arrived in San Sebastian at 2.15pm Portuguese time, five hours late and just six hours after the start of the game against Real Sociedad. The lunch had to be restructured and the players’ rest period before the opening whistle, of course, was significantly reduced. What is certain is that at 8 p.m. in Portuguese, Real Madrid and Real Sociedad were on Anoeta’s pitch awaiting the start of the match.

With Bale’s problem more or less resolved and the Welsh loan to Tottenham confirmed, Zidane could not count on several players during this first appearance in the Spanish league: Hazard, Asensio, Lucas Vázquez and Isco are all injured and were not not an option for official debuts. current Spanish champions this season. In the starting XI of the meringues, the highlight was the presence of Odegaard in midfield, the young Norwegian who last season was loaned precisely by Real Sociedad and who returned to the Real Madrid team. Another return was on the bench, Odriozola, who spent the last year in Germany and was European champion from Bayern Munich in Lisbon. The two young Brazilians, Rodrygo and Vinícius, started in the lanes and backed Benzema, while Casemiro and Valverde started on the bench.

In contrast, with the attacking duo Oyarzabal and Isak, one of the most resounding reinforcements this summer in Spain was in a substitute position: David Silva, the midfielder who left Manchester City for Real Sociedad. Who joined Silva on the bench was Nacho Monreal, ex-Spain Arsenal who was also not an initial option for Imanol Alguacil. Real Madrid completely dominated in the first half but struggled to create dangerous situations, always keeping something out of Remiro’s goal. Benzema was even the most daring element of the meringues, already with two side shots in the dying moments of the first half (37 ′ and 39 ′), but the best chance of the game until the break belonged to the Basque team. Oyarzabal served Isak, the Swede tried to open the scoring but Courtois, with a huge defense, kept the scoreless (42 ′).

On the way to the break, there was the absolute idea that Real Madrid had been better – but Isak’s opportunity, unlike how difficult the meringues had in creating scoring chances, showed Real Sociedad had the ability to orchestrate a dramatic turn from moment to moment. And the Basques confirmed it from the dangerous first throw of the second half, Barrenetxea narrowly missing the opening of the scorer (46 ′), Benzema responding on the other side with a deflection of the right foot that Remiro was holding ( 61 ′)).

Shortly after the hour mark was the moment that much of the Basque Country was waiting for: Isak left, David Silva entered, who made his official debut for Real Sociedad and therefore returned to Spanish football ten years ago. after leaving Valencia for Manchester City. On the other side, Zidane launched Casemiro and young Marvin, a 20-year-old midfielder from Merengue who is part Nigerian, part Korean and born in Mallorca. Real Madrid looked for the decisive goal until the last moments, with very high lines, but the truth is that they never managed to completely suffocate and left Real Sociedad space and peace. In the middle, young Arribas, who also won the Youth League against Benfica and alongside Marvin, made his debut for Merengue’s main squad.

Until the end, nothing has changed. Real Madrid went no further than a draw in the first official game of the season and started defending the title on the wrong foot, a factor Barcelona will look to capitalize on next week, when they make their debut in the Spanish championship against Villarreal. . After an exhibition that made it clear that meringues are still at a low rate and with a lack of pre-season, transport issues to the Basque Country turned out to be Zidane’s team’s best metaphor: to go by plane , had to take the bus and ended up walking.

Can Joe Biden Become US President ?: How Donald Trump Gets Hit – Politics