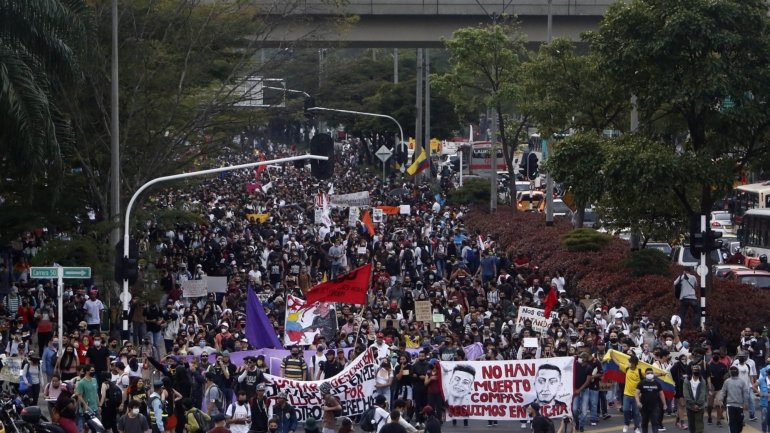 Thousands of demonstrators took to the streets of Colombia on Monday to protest against police violence, 11 days after the start of a wave of protests sparked by the death of a man at the hands of the police.

At least nine people were arrested Monday after attempting to loot banks and public property, according to police chief General Atehortua, quoted by the France-Presse (AFP) news agency. Clashes with riot police, who released tear gas, were reported in the capital, Bogotá, Medellin and Pasto, the same source said.

The wave of protests, which left 13 dead and hundreds injured between September 10 and 12, was sparked by the death of a lawyer on September 9, after the repeated use of a “ taser ” by two policemen, in Bogota.

The 46-year-old man was immobilized on the ground by two officers and subjected to repeated electric shocks, an incident whose images, captured by witnesses, caused outrage in the country, recalling the case of the Afro- American George Floyd, suffocated by police officers in the United States. The victim ends up dying hours later in the hospital. Nearly two-minute video shows two Colombian police officers administering electric shocks to lawyer Javier Ordoñez, as he pleads “please” and “agents, please”, with witnesses from the scene also asking the police to stop. On Monday, Colombian justice ordered the preventive detention of the two police officers, accused of torture and murder, according to AFP.

On September 11, the European Union (EU) High Representative for Foreign Policy Josep Borrell called for an investigation into police violence in Colombia and the punishment of those responsible, urging the country to adopt “institutional measures” to prevent this from happening again. cases like this.

Amnesty International also condemned the “acts of torture” suffered by Javier Ordoñez and called for an end to “the excessive use of force [policial]”Against the demonstrators.

Consequences of the corona pandemic: How the economic crisis is dividing the world economy

The photos of the pot by Sérgio Moro. Brazilians went to the windows to knock on pots and shout: “Out, Bolsonaro!”

He is said to have carried a knife: 27-year-old African American shot by police in Philadelphia – politics