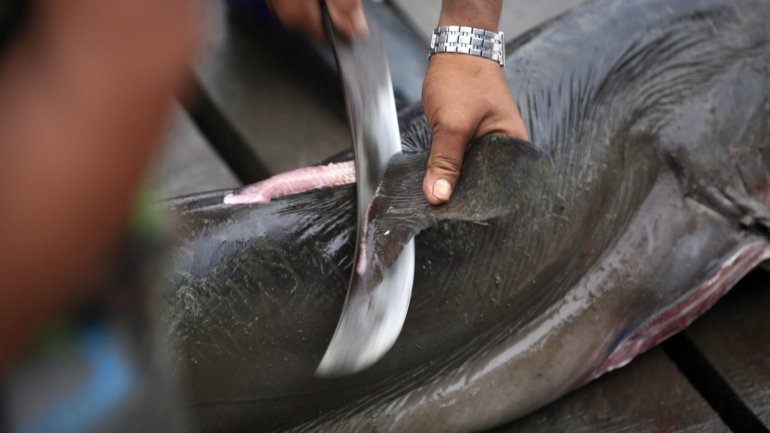 Untapped amounts of sharks are being exterminated in Angola for the removal of fins, which are supposed to be marketed to Chinese citizens, said EcoAngola, a philanthropic environmental education and conservation project.

Speaking to the Lusa agency on Tuesday, EcoAngola’s general manager, Érica Tavares, said she had received the first complaints from several people on September 12 about this situation in the municipality of Cacuaco, province of Luanda, capital of Angola. , but without images.

“But then we managed to find someone to send us pictures and send the first pictures that were taken in Cacuaco, Luanda,” he said.

According to Érica Tavares, in the complaint “it was found that many sharks were indeed caught on purpose and just to remove the fins”.

“A few days later, on September 17th, we ended up receiving a similar complaint, but this time in Benguela, which was the video being released and which, according to reports from the person who sent the complaint and according to witnesses, is – what fishermen are doing lately, which is a common practice, ”he added.

Érica Tavares declared that the witnesses underline that “it is citizens of Chinese nationality who made this purchase”.

“And we know it’s an exotic product in Asia, that shark fin soup was made, because it is believed to have medicinal benefits, aphrodisiac powers, when in reality it’s a myth. , it is not scientifically proven to cause this. , but since there is a very large market in China, we believe it is exported to China, ”he said.

EcoAngola, a project that has been in existence for a year, with 100 active members, contacted the Institute of Biodiversity and Conservation Area of ​​the Ministry of Culture, Tourism and Environment, which promised to conduct an investigation. and issue a public statement on the situation.

In view of the current context that the country is going through, due to the covid-19 pandemic, EcoAngola has not yet been able to get on the ground for investigation, said Érica Tavares, in this sense, she transmitted the information to the institutions that have this responsibility.

For the environmentalist, the problem in Angola is the lack of inspection, which only arises after a complaint and social pressure.

“And this is what we are trying to do, we have filed a complaint, we are waiting, but we are putting this pressure to be able to make things happen, to be able to have an investigation, a response and raise public awareness,” he said. He underlines.

Pressed to present an estimate of the number of sharks killed in this practice, Érica Tavares declared that she was unable to advance quantities, but stressed that “it is a lot”.

“And this amount of shark overfishing can cause a major imbalance in marine flora and fauna, as sharks are predators and they are able to control populations of other types of species that are found below sharks and if there is this imbalance, the other populations can grow a lot ”, he stressed.

“For example, many algae or many plants controlled by other fish controlled by sharks can grow, it can happen, it is the cascading effect,” he added.

The provinces of Luanda and Benguela are reportedly reporting this environmental crime, but EcoAngola’s executive director believes it can happen across the coast, “where sharks exist and there is such research” .

“In the past, fishermen didn’t even want to know more about sharks, it was bad luck when the sharks got into the nets, they were quickly released, but now that there is this demand and also need, poverty in Angola is increasing, and if it is done. [sorte] sharks are caught because the public does not understand this balance between marine flora and fauna either, ”he said.

Regarding the rest of the animal, after removing the fins to sell it, at a price the ecologist does not know, witnesses said it was thrown away.

“But I don’t think that’s a very realistic possibility, because we know that this poverty situation is really much worse and I don’t think fishermen just throw out those leftover fish, I think they should eat the fish. “, did he declare.

If the CDU has to deliver the chancellor again, why isn’t Merkel paving the way now? – Politics