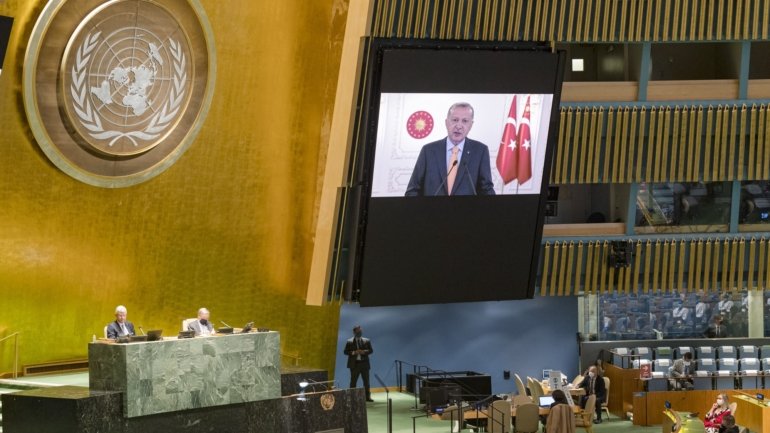 In his speech during the general debate of the 75th session of the United Nations General Assembly, the Turkish president lamented that his country was “forced to bear the burden of any negative development in the eastern Mediterranean alone”, but he warned all those who ignore his country around natural resources, following the recent discovery of large deposits of gas in the seas of the region.

“Our priority is to resolve disputes through sincere dialogue, based on international law and on an equal footing. However, I would like to make it clear that we will never tolerate any imposition, harassment or attack from the opposite direction, ”he said, before appealing again for“ the establishment of dialogue and cooperation ”between all the countries bordering the eastern Mediterranean.

In this sense, we would like to propose the holding of a regional conference, including the Turkish Cypriots, in which the rights and interests of all the countries of the region are taken into account, ”he said.

In his nearly half-hour speech and transmitted via videoconference, Erdogan also cited the long-standing situation on the island of Cyprus, shared between Greek and Turkish Cypriots, to justify continuing tensions in the region.

“One of the reasons for the crisis in the region is the lack of a just, inclusive and permanent solution to the Cyprus question during the negotiations which have continued endlessly since 1968,” he said.

In this perspective, he accused the “Greek Cypriot side” – in a reference to the internationally recognized Republic of Cyprus – of constructing “the only obstacle” to a solution by a “rigid, unfair and negative” approach.

And he underlined that, “by ignoring international agreements, the Greek Cypriot side intends to make the Turkish Cypriots a minority in their own country, or even exclude them completely from the island”, in a reference to the self-proclaimed Turkish Republic of Cyprus of North (TRNC), which occupies the northern third of the island and is recognized only by Ankara, which since the 1975 military invasion has kept tens of thousands of troops on the ground.

“We will support any solution which permanently guarantees the security of the Turkish Cypriot people and their political and historical rights on the island,” he said during his speech, where he also addressed various internal and international issues.