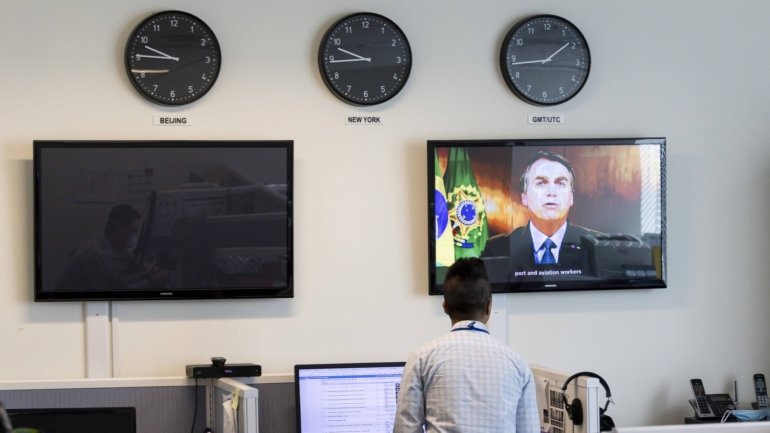 The President of Brazil said on Tuesday that he had been bold and implemented measures to prevent the Covid-19 pandemic from further damaging his country’s economy, at the start of the debates of the 75th session of the United Nations General Assembly. (UN).

From the start, I warned, in my country, that we had two problems to solve: the virus and unemployment, and that both should be treated simultaneously and with the same responsibility (…) Our government has boldly implemented several economic measures that avoided the greatest evil, ”said Jair Bolsonaro, in a speech recorded and broadcast by the UN.

Bolsonaro also used the speech to attack media companies and journalists for the problems that arose during the pandemic saying that “part of the press [media] Brazilian politics have also politicized the virus, causing panic among the population, “believing that” under the motto “stay at home” and “the economy that we will see later”, has almost brought social chaos to the country “.

The Brazilian head of state cited, among the measures he considered favorable and which were taken by his government, emergency aid in installments amounting to around one thousand dollars. [cerca de 854 euros] for 65 million people, resources intended for health actions, support for small businesses and loss of income for states and municipalities.

The Brazilian president underlined that “he encouraged, listening to health professionals, the early treatment of the disease; Covid-19 patient care ”.

Bolsonaro’s statements to other world leaders about the success of his handling of the pandemic contradict data from the Ministry of Health, which places the country among the most affected in death tolls, with 137,272 deaths recorded – behind only states – United -, and the third in number of confirmed cases, with 4.5 million infections.

The Brazilian head of state also declared that “the pandemic leaves the great lesson” that one can “only depend on a few nations for the production of essential inputs and means” to survive.

“Only the intake of hydroxychloroquine production saw a 500% increase at the start of the pandemic,” Bolsonaro said, citing a substance he advocates for the treatment of the new coronavirus, which is not effective against scientifically proven disease.

Chloroquine and hydroxychloroquine [que tem quase a mesma composição] are used to treat diseases such as malaria and lupus, with no proven effect against the virus that causes Covid-19. The Brazilian official has always defended his application for the treatment of Covid-19 and said he had taken the substance himself when he announced that he was infected with the new coronavirus, last July.

Brazil opened, as usual, leaders’ interventions at the United Nations General Assembly. This year, the multilateral organization is celebrating its 75th anniversary and the meeting started on Tuesday, which has the Covid-19 pandemic as a background, prevented the presence of all participants, bringing it to the video conference format.

Brazil can retaliate against countries that boycott domestic products – Observer