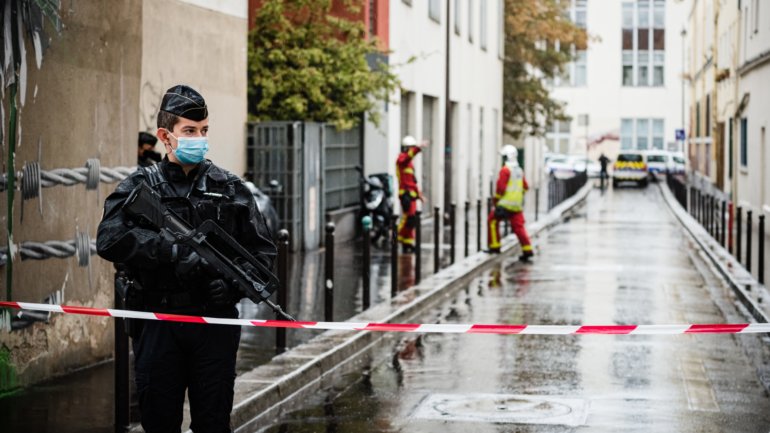 The main suspect of having attacked two people with a bladed weapon on the morning of this Friday next to the old office of Charlie Hebdo, in Paris, had assumed the attack and that his motivation was the republication of the cartoons of Muhammad by the satirical newspaper, the target of an attack in 2015, told AFP a source familiar with the matter.

Two workers from the Première Ligne production company, whose offices are near the former Charlie Hebdo premises on rue Nicolas Appert, in the 11th arrondissement of the French capital, were seriously injured after being attacked by a man armed with a knife. The Eliseu Palace reported having contacted the families of the victims and expressed their “solidarity”.

The main suspect, an 18-year-old Pakistani national, was arrested shortly after in Place de la Bastille. At the same place, another individual was arrested, a 33-year-old man of Algerian origin, who will be a roommate of the first. At the suspect’s home, in the Val-d’Oise region, the target of searches by the authorities, five other men were subsequently detained, aged 24 to 37.

The 18-year-old immediately admitted that he was the author of the attack. According to Le Monde, even before being heard by the police, he would have recognized a political dimension to his act, although he speaks poorly French and English.

The French anti-terrorism prosecution has opened an investigation for “attempted murder linked to a terrorist act and terrorist criminal organization”. The decision, explained the prosecutor Jean-François Ricard, rested on the place of the attack, next to the old editorial room of the satirical newspaper, the moment, since the trial of the accomplices of the attack against Charlie Hebdo took place in Paris and the author expressed will to attack the lives of two people ”.

The trial on the Charlie Hebdo attack began on September 2 and is scheduled to end on November 10. These are 14 individuals suspected of providing logistical support to brothers Said and Chérif Kouachi and Améddy Coulibaly, authors of the 2015 attack. To mark the start of the legal proceedings, the satirical newspaper republished the cartoons of Muhammad which made him a target of jihadists.

“We will never sleep. We will never resign, ”explained the director of the satirical newspaper Riss in the special issue.

What are the best strategies for attracting new mobile app users?