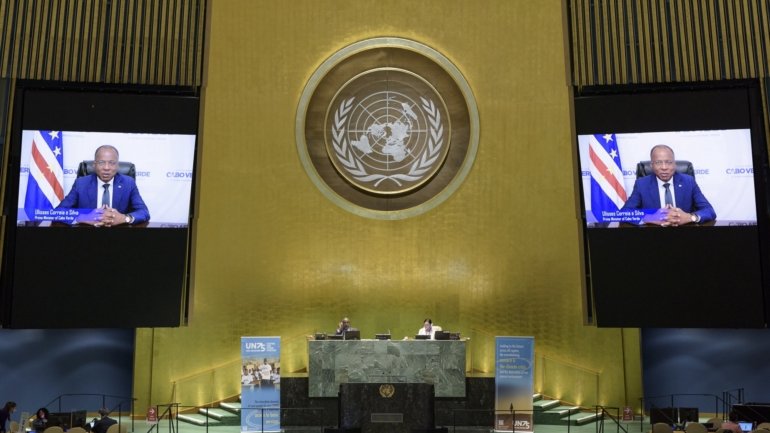 Cape Verdean Prime Minister Ulisses Correia e Silva called this Saturday for a recovery program for Africa from the crisis caused by covid-19, with a global pact for the cancellation of external debt and access to all to the future vaccine.

Speaking this Saturday at the 75th session of the United Nations (UN) General Assembly, the head of government of Cape Verde surmised that the covid-19 pandemic not only required an “internal fight of each country”, but “At the same time a global battle, which requires global collaborative solutions”.

“No one wins with a poorer Africa, with the increase in humanitarian and security crises. Everyone wins if African countries have the necessary conditions to overcome the serious health, economic and social crisis caused by covid-19 and enter a new era of structural transformations that have a positive impact on their economies and the indices of human development, ”said Ulisses Correia e Silva, in the pre-recorded message.

This meeting of the United Nations General Assembly, which takes place annually at the organization’s headquarters in New York, is being conducted this year in different ways, with the leaders of member states speaking through pre-recorded messages, due to of the pandemic.

“It is in this context that equitable and universal access to the vaccine as an essential public good and initiative for the remission of the external debt, must be the subject of a Global Responsibility Pact in order to leave no one behind. “, He launched in the message. from the city of Praia, Ulisses Correia e Silva.

The Prime Minister warned that this pandemic “has further worsened the inequalities between developed and developing countries” and that “few countries in the world have enough savings to face the extraordinary costs imposed” by this “global crisis” , and at the same time recover and restart the economy.

“In the most developed countries, like the European Union, a financial envelope of 750 billion euros was necessary to support the Member States. The financial stimuli of the richest countries exceed hundreds of billions of dollars. And Africa? What about Small Island Developing States? Are they able to bear the costs and the recovery and recovery of their savings on their own? Of course not, ”he says.

Therefore, he considers the cancellation of the external debt “necessary”, “not only to cope with the economic contraction and macroeconomic imbalances” caused by the pandemic, but “as a turning point to revive the sustainable development of African countries. ”, Within a“ A strong commitment ”framework to the Sustainable Development Goals (SDGs).

In the case of Cape Verde, the Prime Minister assumed that this possible remission of the external debt (currently of the order of 1,600 million euros) would make it possible to finance the Strategic Agenda for Sustainable Development by 2030. , with “priority” for the development of human capital; health security, social housing and health; digital transformation; energetic transition; water strategy for agriculture associated with renewable energies; blue economy; and sustainable tourism.

However, Cape Verde still defends a “differentiated approach” from the group of nearly 40 Small Island Developing States (SIDS), given the “high vulnerability to external economic and environmental shocks and the heavy dependence on tourism, a heavily affected sector. “By the pandemic.

He stressed that many of these countries “have performed well in reforms aimed at increasing resilience and reducing vulnerabilities”, but “need time to strengthen”.

“All efforts cannot be in vain. That is why it makes perfect sense to pay particular attention to the initiative to cancel external debt in this category of countries and to other initiatives aimed at recovering economies and pursuing the path. sustainable development, ”he stressed.

Thus, for SIDS, of which Cape Verde is a part, “the response of the international community cannot and should not be an eligibility problem based on GDP per capita”, as it has done until present: “But on the basis of the evidence of the efforts of these countries through the reforms and the progress made and expected to achieve the SDGs”.

Ulisses Correia e Silva asserted that current political leaders “have an additional responsibility and that no one from any country should be left behind”, given “the commitment to millions of young people who care legitimately about their future and that of their children and grandchildren. it will come ”.

Hence the defense that the UN serves to “unite nations in building the future”, which “can only be achieved by reaffirming the irreplaceable importance of multilateralism”.

He added that after 75 years, “everyone agrees that it is necessary to reform” the UN, namely in the composition and functioning of the Security Council, in the revitalization of the Assembly. general, in strengthening the Economic and Social Council and in aligning working methods among them. organs.

Only the right decisions at the start of the championship | Analyze