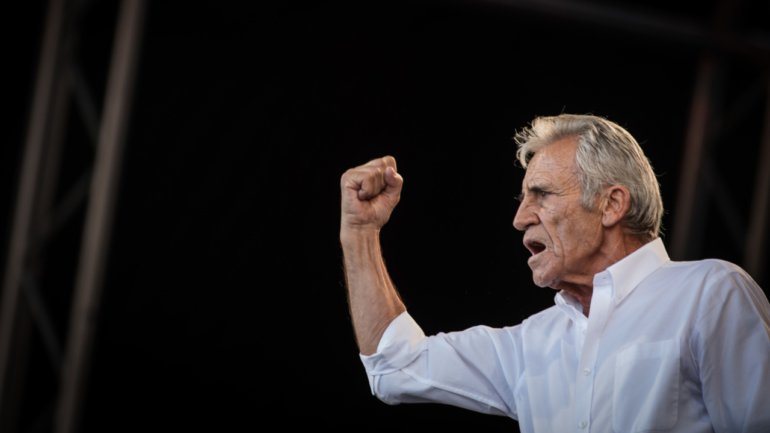 The secretary general of the PCP defended this Sunday that reality shows a structural crisis of capitalism, which the covid-19 pandemic has accentuated, giving as an example the United States of America, contrasting that socialism is the future. In an intervention in Voz do Operário, Lisbon, during the opening of a PCP conference to mark the bicentenary of the birth of Friedrich Engels, Jerónimo de Sousa paid tribute to the German philosopher, who wrote with Karl Marx the “Communist Party manifesto”, and expressed pride in his heritage.

“It is socialism, not capitalism, no matter how ‘humanized’ or ‘green’ they try to sell it, which is the future of society,” argued the PCP general secretary, at this occasion, reiterating his party’s commitment to the “revolutionary project” and its determination to “fight for socialism to become a reality for the Portuguese people of tomorrow”.

According to Jerónimo de Sousa, “the covid-19 pandemic has shed even more light on this question”, because “it has accelerated and deepened trends whose causes are at the heart of the structural crisis of capitalism”, demonstrating that “the capitalism is not only incapable of providing solutions to the problems of workers and peoples, because this tends to aggravate them and to lead the world into a terrible social and civilizational regression ”.

“Deep capitalist contradictions are even more exposed and the dogmas of savage capitalism, which some call neoliberalism, crumble when we see great powers plunged into chaos and deep social conflicts, as is the case with states -United of America, ”he stressed, for example.

According to the secretary general of the PCP, “reality shows that capitalism is not, cannot be and will not be the end of history” and its “inhuman face” became more visible during this period. “However, as the founders of Marxism already stated, do not expect capitalism to fall on its own,” he added.

Jerónimo de Sousa ended his speech by concluding that the “unity, organization and struggle” of the workers and the existence of “a strong, permanently strengthened Communist Party” are essential. “In the conditions of Portugal, the communist society that the PCP indicates to our people goes through the stage that we have called ‘advanced democracy’, the basic definition of which is based on the concept that democracy is both political, economic, social and cultural ”, he declared.

The secretary general of the PCP argued that “there are no” models “of revolutions, nor” models “of socialism” and that for its implementation it is necessary to “take into account a great deal of diversity of solutions, stages and phases of the revolutionary struggle ”.

“It is with the deep conviction that socialism is projected and materialized in the future of the people that, by celebrating the 200th anniversary of the birth of Friedrich Engels, we reaffirm the determination of the PCP so that the future of socialism becomes a reality of the future of the Portuguese people ”He declared.

In this intervention, Jerónimo de Sousa also spoke of “socialism in the Soviet Union”, considering that, although defeated, he had “extraordinary economic, social and cultural achievements” which “demonstrated the superiority of the new society”, and that ‘we cannot erase its “irreplaceable contribution of the USSR to the great revolutionary conquests of the twentieth century”.