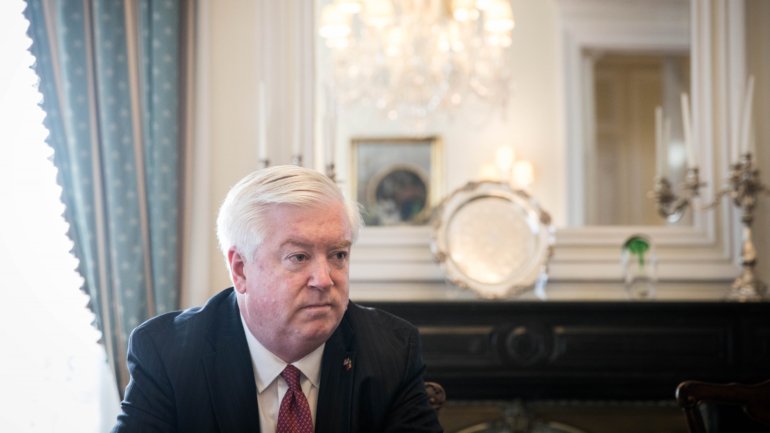 US Ambassador George Glass has warned that Portugal “must now choose” between China “partner” or US “allies” in processes such as 5G, the entry of ACPC into Mota-Engil or the construction of the Sines terminal.

In an interview published Saturday by the Expresso newspaper, George Glass said that Portugal “must choose” between “working with security partners, allies, or working with economic partners, the Chinese”, leaving possible changes in relationship with Portugal at the level of Defense and, possibly, the political relationship between the two countries.

Among the “choices” to be made by the Portuguese government – which, however, through the voice of Foreign Minister Augusto Santos Silva, has already replied that “in Portugal decisions are taken by the Portuguese authorities” – the Ambassador recalled the decisions regarding the entry of Chinese Huawei into the 5G network and ACPC in the capital Mota-Engil, having also warned that if the Chinese won the tender for the Vasco da Gama terminal in Sines, the American natural gas will have to find other alternatives.

Admitting that “Portugal inevitably ends up being part of the battlefield in Europe between the United States and China”, with whom it “has done business for centuries”, George Glass maintains that “it is not the same China with which [o país] he has dealt for the past 500 years, “but” a new China, with long-term plans to accumulate evil influence through economics, politics, or other means. “

Among the different processes mentioned by the ambassador are:

The attempt by the Chinese Three Gorges of China (CTG) to assume a controlling position in EDP – with a takeover bid that has meanwhile failed – has been pointed out by the US Ambassador in Lisbon as “the first” battle in Portugal of the war between the United States and China.

Currently, CTG stands out as the main shareholder of EDP, with 21.55% of the capital, followed by the Spaniards of Oppidum Capital (7.20%) and the Americans of BlackRock (4.16%), having seen En 2019, the takeover bid (takeover bid) that it launched on the Portuguese electricity company was canceled.

CTG joined EDP in 2012, taking a 21.35% stake in the privatization of the company for 2.69 billion euros. In May 2018, it launched an energy takeover bid, with a consideration of 3.26 euros per share, which would nevertheless be fought almost a year later (in April 2019) by EDP shareholders, for lack of modify the bylaws end the limitation on voting rights to 25% of the capital.

At the time, EDP’s executive chairman, António Mexia, however guaranteed that the partnership with CTG was “important and to be maintained” and that “whatever the results of the offer”, the Chinese group would remain ” EDP’s strategic investor ”.

Despite some capital transfers that have taken place since, the biggest contribution to the Portuguese electricity company’s recent capital increase came precisely from CTG, which bought more than 66 million shares for a total of around 220.3 million euros, and, with a subsequent acquisition of the remaining shares, in distribution, strengthened its position to 21.55%.

EDP’s renewable energy arm – EDP Renováveis ​​- has a strong presence in the North American market, but on September 3 it announced that it had sold 80% of its wind and solar portfolio shares to the States -Unis for an amount of approximately 570 million euros, justifying the agreement with the strategy of “asset rotation” of the company.

George Glass admits, in the interview to Expresso, of possible “sanctions” for Portuguese companies engaged in business with their Chinese counterparts, recalling the case of the Mota-Engil group, which accuses of having sold “for 30 pieces of ‘money’ 30% of its capital to the Chinese of China Communications Construction Company, Ltd. (ACPC).

It is a high quality flagship company which now has a huge influence from a foreign entity. If they want to do business in Angola, Mozambique or Mexico, those countries have respect for a big Portuguese company. But now they have to be aware that there is a bad influence that can have different intentions in relation to the company, ”the diplomat said.

On August 27, the Portuguese group Mota-Engil announced that it was in the “final phase” of negotiating a strategic partnership and an investment agreement with ACPC, which will retain 30% of the company after an increase. of capital.

Mota Engil is ACPC’s partner in the construction of the rail infrastructure in Tren Maya, Mexico, in what is “the biggest contract ever in Latin America”.

According to the group, the ACPC must undertake to subscribe to a relevant participation in a capital increase of a maximum of 100 million new shares which will soon be submitted for deliberation to the General Assembly.

After this capital increase, it will be attributable to MGP [Mota Gestão e Participações] a participation of around 40% of the capital of Mota-Engil, a sign of total commitment and alignment with its historical position in the group, and the new shareholder will achieve a participation slightly above 30% ”, he said declared.

The issue of fifth generation (5G) mobile networks has been at the center of the exchange of accusations between China and the United States, with the European Commission recommending that member states apply “relevant restrictions” to suppliers deemed to be “At high risk” “.

Ambassador George Glass has now left negative effects on Portugal / US bilateral relations on the air if, as part of the 5G spectrum auction scheduled for the last quarter of this year, China’s Huawei begins supplying this 5G technology to communication companies in Portugal. .

These are decisions that Portugal will have to make. We would prefer something like the UK, only with trusted providers in the 5G network. This is very important, because we know that 5G is all-encompassing: whether it is at the center or in the network, it is inside the system. And so we would prefer that there was no Huawei equipment on the 5G network, but we have to wait until the work continues to figure out, ”Glass told Expresso.

The auction for the allocation of 5G licenses has been discussed since 2019 and its completion was pointed to in April of this year, eventually being suspended by the telecommunications regulator due to the pandemic.

The process resumed in July, with the completion of the public consultation procedure for the draft auction regulations, with the National Communications Authority (Anacom) announcing that the auction will take place between October and December, with the allocation of rights of use. frequencies planned for January / February 2021,

New terminal in the port of Sines

The new Sines terminal was another of the investments mentioned by the North American Ambassador, who described the Portuguese port as “incredibly strategic”, being the “closest deep-water port to the United States”.

George Glass argued that “a Western company operates and builds the terminal [Vasco da Gama]Warning that if the choice fell on a Chinese company, it would affect the US ‘vision’ of ‘what Sines can become’ in the US liquefied natural gas distribution process.

The Port of Sines is currently in an infrastructural expansion phase, with the extension of Terminal XXI (containerized, managed by the concessionaire PSA Sines) and also the construction of a second terminal for containerized freight, called Vasco da Gama Terminal. .

The deadline for submitting proposals under the international public tender for the construction of this second terminal has been extended until April 6 this year, with an investment of 642 million euros in a new structure with an annual processing capacity of 3.5 million euros. TEU and a jetty with a length of 1375 meters with three simultaneous docking positions for the world’s largest ships.

In the initial schedule, the award of the project (construction and exploration) was scheduled for the last quarter of this year and the start of work in 2021.

Cabinet committee on right-wing extremism: why the Union and the SPD cannot agree on the fight against racism – politics

“Continue to edit!” Asks the Lisbon Graphics Fair. Even in the event of a pandemic | Books