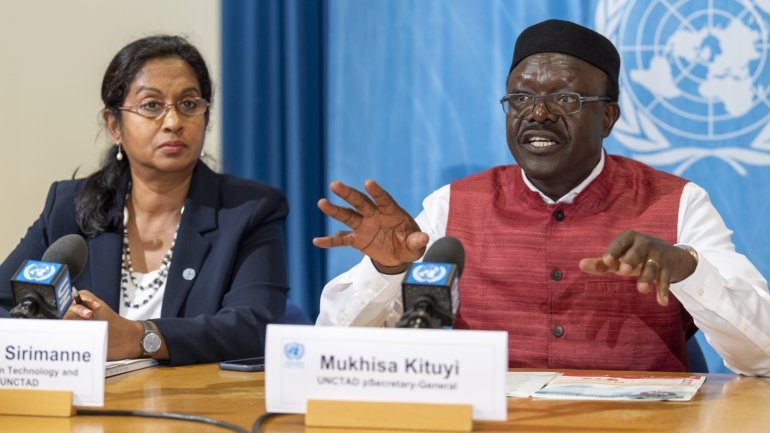 The Secretary-General of the United Nations Conference on Trade and Development (UNCTAD) said today that illicit financial flows are seriously damaging the African economy and confidence in the institutions of the continent.

“Illicit financial flows rob Africa and Africans of their prospects, undermining transparency and accountability and eroding trust in African institutions,” Mukhisa Kituyi wrote in a post on Twitter the day after the presentation of a report on the continent. .

The report released on Monday shows that illicit capital outflows represent $ 88.6 billion (76 billion euros), almost double the flows placed on the continent in terms of official development assistance. , valued at 48 billion USD (41 billion EUR). These flows leaving the continent “include capital flight, irregular business practices such as invoices, commercial shipments and criminal activities such as illegal markets, bribery or theft,” said in a statement released today. hui by UNCTAD.

The solution, analysts say, “must pass through international tax cooperation and anti-corruption measures” on the part of the international community, but African countries “must strengthen their involvement in tax reforms and make tax competition compatible with protocols. free trade agreement “.

UNCTAD estimated on Monday that the African continent could guarantee nearly half of the 200 billion dollars (171 billion euros) it needs to fight the pandemic if it succeeds in eliminating the flight of capital. “The fight against capital flight and illicit financial flows in Africa could generate new funds to respond to the Covid-19 crisis on the continent,” reads the report on economic development in Africa 2020. “The African countries must raise funds for at least $ 200 billion to meet the socio-economic costs of the Covid-19 pandemic, in addition to emergency health spending, ”the report reads, which states that “$ 88.6 billion [76 mil milhões de euros] they leave the continent every year in the form of illicit flight of capital, which represents a wealth that goes and stays outside the continent ”. For United Nations experts, “keeping these funds on the continent can strengthen the response to covid-19 and strengthen the resilience of African economies in the future.” In the report, it is praised that in Angola, “in 2004 and 2012, following criminal investigations into corruption and money laundering in Angola, this African country and Switzerland allocated the recovered funds to the construction of a hospital, infrastructure, water supply and capacity building for the reintegration of displaced people ”.

Africa has recorded 310 additional deaths from Covid-19 in the past 24 hours, rising to 35,750 deaths, out of a total of 1,465,023 infected, according to the most recent data on the continent’s pandemic. According to the African Union Center for Disease Control and Prevention (Africa CDC), in the past 24 hours, there have been more than 5,309 cases of the disease in the organization’s 55 member states and 4,877 recovered, for a total of 1,210,548. The first case of Covid-19 in Africa appeared in Egypt on February 14, and Nigeria was the first country in sub-Saharan Africa to report cases of infection on the 28th. February.

The Covid-19 pandemic has already claimed more than a million lives and more than 33.1 million cases of infection worldwide, according to a report from the French agency AFP. The disease is transmitted by a new coronavirus detected at the end of December in Wuhan, a city in central China.

Covid19. Angolan doctors worried about number of deaths and infections among class – Observer

Café America: “ugly and irritating” debate between Trump and Biden

Fewer controls caused by Corona: The government sees a danger in pharmaceutical production in the Far East economy