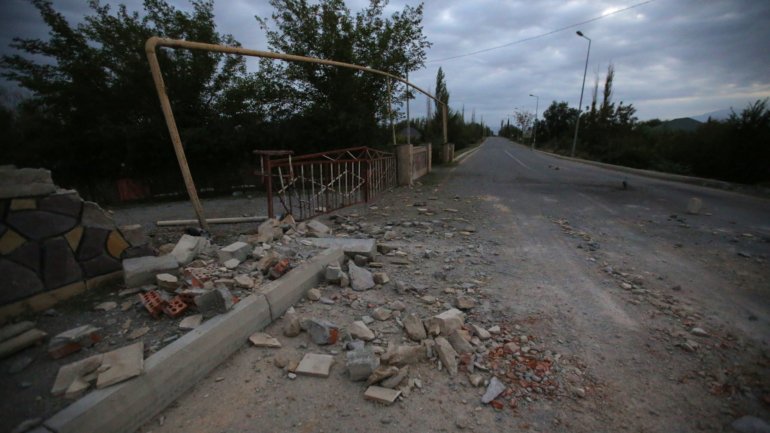 One person died as a result of attacks by Azerbaijani forces in the city of Vardenis, Armenia, the Armenian Foreign Ministry said on Tuesday. This is the first death on Armenian soil linked to the resumption of conflict in the Nagorno-Karabakh region officially confirmed.

The announcement comes on the same day that Armenia and Azerbaijan exchanged accusations again, this time related to attacks on the territories of the two countries far from Nagorno-Karabakh.

According to the Armenian Foreign Ministry, the attacks against Vardenis, carried out with drones, targeted a military unit and caused a fire in a passenger bus, but no one was injured. On the contrary, in the border area, everything seems calm. “The Armenian border with Azerbaijan is relatively calm,” spokesman Artsrun Hovhannisyan admitted, quoted by Reuters.

The Azerbaijani Foreign Ministry in turn announced that the Armenian army had attacked the Dashkesan region inside Azerbaijan. Armenia has denied these statements. Azerbaijan has also reported attacks from both sides towards Fizuli, Jabrayil, Adgere and Terter, areas occupied by Armenians along the border with Nagorno-Karabakh. Armenia said the Nagorno-Karabakh army repelled several attacks overnight from Monday to Tuesday.

On Monday, the leader of the separatist region, Arayik Harutyunyan, announced the deaths of 30 soldiers. According to the Armenian Ministry of Defense, some 200 people have been injured as a result of the reopening of the conflict in the region. Azerbaijan has confirmed 26 wounded civilians on its side.

Conflict in Caucasus continues: more than 30 Armenian soldiers have died in Nagorno-Karabakh

Although internationally recognized as part of Azerbaijan, the Nagorno-Karabakh region is controlled by an ethnic Armenian majority. The conflict between the two sides dates back to Soviet times, when, in the late 1980s, the population of Nagorno-Karabakh, populated mainly by Armenians, requested its incorporation into neighboring Armenia.

This was the motto of the war, which lasted for several years and claimed around 25,000 lives. At the end of the conflict, Armenian forces took control of the region, although Azerbaijan maintains a strong military presence throughout the demilitarized zone that separates the region from the rest of the country.

Azerbaijan argues that the solution of the conflict necessarily involves the liberation of the occupied territories, a demand which has been supported by several resolutions of the United Nations Security Council. Armenia, for its part, supports Nagorno-Karabakh’s right to self-determination.

Who is Zhong Shanshan, the bottled water tycoon? – Observer

Beach of others | Megaphone

Morality in Politics: What Dealing with Moria and the Attack on Navalny Have in Common – Politics