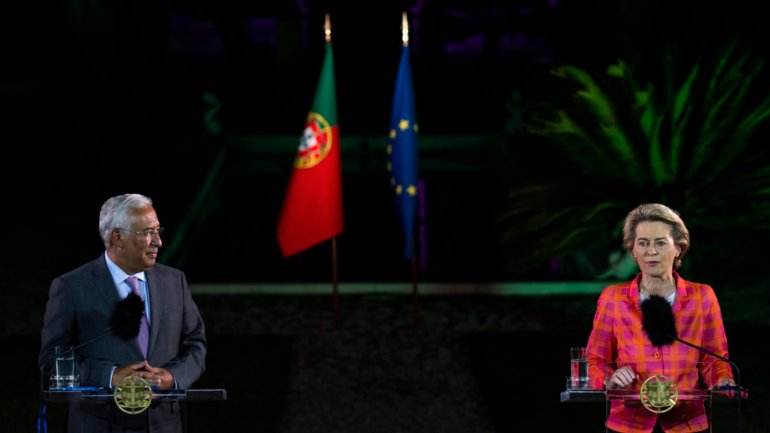 He quoted “the great” Luís de Camões – to say that Portugal “has always sailed” on “seas never sailed before” – drew a parallel between the “catastrophe” of the pandemic and the earthquake of 1755, recalled the “very difficult reforms” of the past (a reference to those made at the time of the troika) and praised the “country of the great explorers” and “the vibrant energy” of its “sporting heroes”. Ursula Von der Leyen did her homework for the speech presenting the orientations of the European Union’s recovery plan – the same priorities which, she guarantees, are also reflected in the “ambitions” that António Costa has enshrined in the Portuguese plan (the main lines of which will be closed on October 14 and sent to Brussels the next day).

The praise left them to the “mediator” Costa and Portugal – to the “enchanting landscapes of Sintra and its mountains” which inspired “from Lord Byron to Richard Strauss”; The “vibrant energy” of the country which has “young tech talent” and produces “clean energy”; to the “humility, responsibility and solidarity” of the Portuguese people. António Costa wanted to give him reasons and, a few minutes later, in his speech, he took the opportunity to say that Portugal will make full use of the grants that are part of the European Recovery Fund, but that it will abdicate the loans, at least “while the financial situation of the country does not allow it”.

This plan mobilizes grants and loans. We have a very high public debt and we need to come out of this crisis in a more modern and greener way, but also more solid from a financial point of view ”, explained Costa.

António Costa presented the priorities for the recovery and resilience plan, but did not provide very specific measures – in addition to the “20 km route”, which “puts Bragança half an hour from a TGV station »(As I had already said to Público). He focused more on strategic axes: resilience, climate transition and digital transition.

Layoff adjustments and three other recovery measures: for tourism, culture, catering and transport

It is because the Prime Minister wants the plan to have “a structural effect” and that each investment corresponds to a reform. We can expect a strengthening of the NHS and social and housing responses. An eradication of the “social divides” highlighted by the pandemic in urban areas An improvement in skills and investment in innovation. “There is a huge potential for knowledge in all our universities which is already sufficiently mature”, and which can be valued “economically”.

The document will also focus on cross-border connections with Spain. And he gave the example of Bragança “the most isolated district capital in the national context”. “We are going to do a 20 km road, which connects the border and which puts Bragança at half an hour from a TGV station – well, it’s not TGV, it’s High Speed ​​(AVE) “, declared the Prime Minister, correcting himself in the always a sensitive question of the TGV. “It is this kind of transformation” that will convince investors to bet on Portugal, Costa said.

Then work, work, work. The action plan “must strengthen citizens’ confidence” in the changes to come, especially in the world of work. “People are afraid of this change, of losing their jobs. This fear undermines confidence in the future of Europe ”. This is why, he asserts, “there is only one way to fight fear: and that is to give people confidence in their ability to be able to control the robots likely to occupy the position they currently hold. Many stations will be automated ”, but“ workers cannot be left behind ”. And it also guarantees an investment in public administration and its reduction of bureaucracy.

António Costa underlined that investments are necessary “to carry out the reform of the forest”, namely with “the landscape plans to ensure the end of the monoculture of eucalyptus or pine”. “We all know the tragedy of forest fires. The forest cannot be the drama of forest fires ”.

And when he spoke of the need to fight against desertification and the problem of the lack of water in the south of the country, he went to Von der Leyen to say: “We must come on vacation to the Algarve”. However, the Algarve “must be more than a tourist destination”, Costa believes. It must be able to respond to the “threat of desertification”.

António Costa wants Portugal to be one of the first countries to conclude the agreement with the European Commission and to present the draft plan. This project will be closed on October 14 and delivered to Brussels on the 15th. At the beginning of next year, the final version of the plan will arrive.

These “priorities and ambitions,” says Von der Leyen, “exactly mirror those of NextGenerationEU”, the EU’s stimulus package for reforms and investments. What priorities? “Repairing our social fabric”, “protecting our single market”, “moving rapidly towards a just, ecological, digital and resilient future”. And job creation – the SURE program also aims to “create jobs by anchoring the recovery in the ecological and digital economy of the future” and to ensure that “no one is left behind”.

I would like to thank Prime Minister António Costa for his support in acting as a mediator in this historic agreement reached last July, ”he said.

Marcelo again urges Rio to approve the budget: “The pandemic does not know electoral cycles”

And Portugal itself “can be a model for others”. What can you learn from us? Von der Leyen responds, especially with the Troika. Will NextGenerationEU put particular emphasis on reforms – “And Portugal has a lot of experience in this area, from the very difficult reforms of the past to the most recent reforms, in areas ranging from lifelong learning? life in the health sector fight against the segmentation of the labor market… essential reforms ”. Then it has “digital leadership in many areas”, such as hosting “80,000 of the world’s most renowned technology professionals at the Web Summit”. And there is “the quality of training in specialized universities in Braga, Porto or here in Lisbon”.

It is, he argues, that I have to take advantage of “all this” and, therefore, there is a need to “invest now” – “in skills, in artificial intelligence, in 5G”. However, “we need to ensure that high speed internet in Lisbon is also available in rural areas, like Marvão or Monsaraz”.

The fight against climate change must also be a priority, an area in which, he says, “Portugal is at the forefront”. “This country is unfortunately used to forest fires. It has been around for many years. But the difference now is its frequency and intensity. Urgent action is needed, and the pandemic only makes the situation even more urgent. “

The EU’s Next Generation instrument, of which Portugal “will be a great beneficiary”, “will help revitalize the economy which had recovered so well from the last crisis thanks to the hard work and sacrifice of the Portuguese people”, says von der Leyen. And he concluded: “The people of this country have shown enormous responsibility and resilience in the way they have come together to fight this virus.”

Frank Hoppmann is the winner of the World Press Cartoon