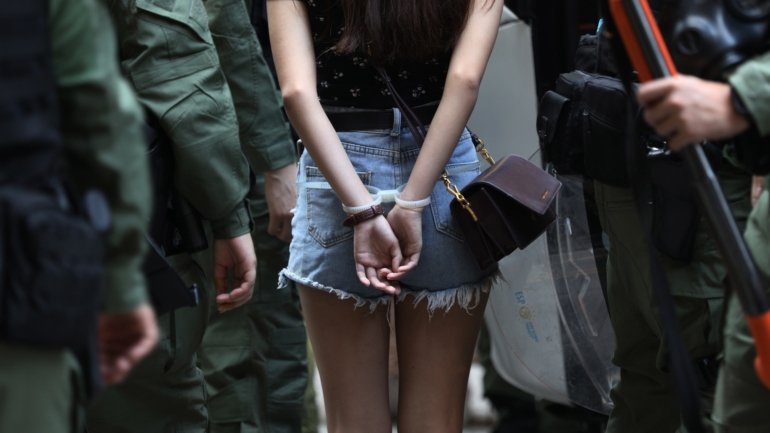 Hong Kong police on Thursday arrested at least 60 people on suspicion of an unauthorized meeting on China’s National Day, after protesters gathered on the streets of a popular business district chanting phrases in favor of democracy. Among the detainees are two district councilors, police said in a statement posted on the social network Facebook.

Authorities said people were arrested after ignoring repeated warnings asking them to disperse.

Social media calls urged people to protest, and many came to the Causeway Bay shopping district in Hong Kong. Many of these people shouted “Keep the police away”, “Free Hong Kong” and “The revolution of our time”, a popular pro-democracy phrase that was banned by the Hong Kong government for having allegedly incited to separatism. However, the police presence exceeded the number of protesters at the site, after thousands of intervention police were deployed to prevent any large-scale pro-democracy protests on Chinese National Day.

The National Day, which celebrates the founding of the People’s Republic of China, has become a day of protest in Hong Kong for those who oppose Beijing’s growing control over the city. Large-scale protests are banned due to social distancing restrictions imposed due to the novel coronavirus. This Thursday, the police isolated certain areas of the neighborhood and searched people in the streets. On several occasions, authorities showed warning banners urging protesters to disperse, claiming they were participating in an illegal demonstration.

Protests against the governments of Hong Kong and mainland China increased last year, and Beijing clamped down on expressions of anti-government sentiment in the city with a new national security law that took effect on June 30. The law prohibits subversive, separatist and terrorist activities, as well as collusion with foreign powers to interfere in the internal affairs of the city.

The United States and Britain accuse China of violating the city’s freedoms, and the United States has imposed sanctions on government officials in Hong Kong and China because of the new law.

At a reception to mark the national day, Hong Kong leader Carrie Lam today hailed the “return of peace” to the city following the entry into force of the National Security Law imposed by Hong Kong. Beijing, which helped end the pro movement. democracy.

“Over the past few months, an indisputable fact for everyone is that our society is at peace again,” he said in his official speech commemorating the 71st anniversary of the founding of the People’s Republic of China.

Lam also accused some foreign governments of maintaining “double weight” and of making unwarranted accusations against the authorities who implemented the new law.

How can right-wing extremism be combated by the police ?: Regular questions from the Office for the Protection of the Constitution have a lot of potential for fallacies – politics

Starting shot for the interoperability of European tracing apps

Nevada, Arizona, Georgia in the US election: These are the good reasons for Biden’s optimism – politics