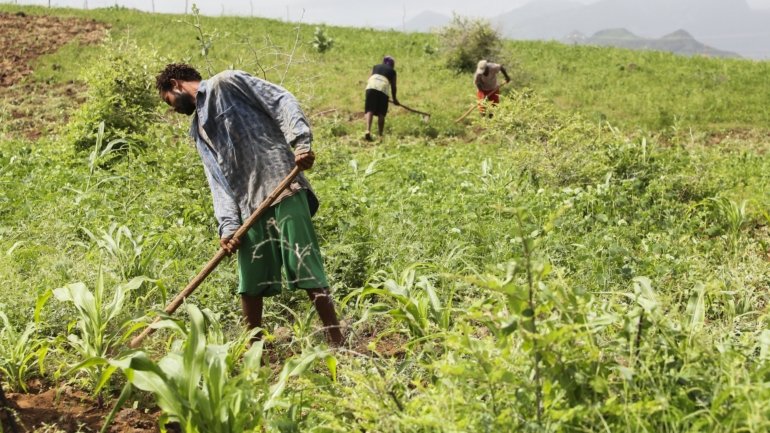 Elisângela da Conceição lives in Leitão Grande, in the municipality of São Salvador do Mundo, Picos, in the center of the island of Santiago, with wetlands and which was one of the first to receive rains this year, since the month of July.

If the harvest last year was ‘more or less’, Elisangela, better known as Já, guaranteed that this agricultural year was better, with farmers in the municipality taking flowers from the cornfield they already have. started harvesting beans and land It’s wet.

“But I think if it rains again, we will guarantee the agricultural year,” said the farmer to the Lusa agency, whose family sowed about 40 liters of corn and beans, which have been preserved from the low production last year.

Of all the gardens in the family, I have already said that some have been attacked mainly by the corn cartridge caterpillar pest and the support from the Ministry of Agriculture and Environment did not arrive in time to prevent destruction of the crop.

Despite this, the Picos resident has rejoiced over fields covered in greenery, pastures for animals and plentiful water in the streams, as has not been seen in the past three years of drought in the country.

“We hope that we will have good water,” said Elisangela, predicting that by the end of October the maize can already be eaten on the first dry land that has been cultivated.

In addition to São Salvador do Mundo, corn is already blooming in some areas of the neighboring municipality of Santa Catarina, as can be seen on the side of the road that connects the city of Praia to the various municipalities in the north of the island of Santiago.

But the same can no longer be said of São Lourenço dos Órgãos or Santa Cruz, where farmers are fighting pests and the corn canister caterpillar and asking for more rain to guarantee a good agricultural year.

In Rengue Purga, in the municipality of Santa Cruz, the farmer Ruben Benin, 23, works alone in his aunt’s garden to make the crown of corn and beans, still very small, and in an already parched land, counts given the few rains that they fell in this county on the east side of the island of Santiago.

In the past three years, Ruben didn’t even bother to sow the corn, and this year he had already thrown the seeds on the ground twice, and only the third time they germinated, along with the rainfall. which fell in early September.

In addition to the little rain, this farmer told Lusa that he is still fighting pests, especially the cartridge caterpillar, which attacks maize on several islands in the country, with the National Institute for Agricultural Research and Development. (INIDA). created a natural insect for its fight.

“The situation at the moment is as follows: corn full of pests, late rains, that’s why we stopped,” lamented the young farmer, who has already lost count of losses, only from the two previous sowing this year in this commune with more arid land.

“I hope God will help us, give us rain,” asked Ruben, who studied until Grade 5, and now holds his hoe firmly, which he uses to work the land and earn a living.

In the neighboring municipality of São Lourenço dos Órgãos, the biggest calling card is the Poilão dam, the first hydraulic infrastructure of the type built in Cape Verde, funded by the Chinese government and inaugurated in July 2006.

If about two months ago the scene around the dam was dark, with no water, no dry land and no withered plants, today the situation is completely different, with a green blanket covering the whole area, the dam with about a quarter of bran according to farmers.

Farmers in the area do not yet use the little water accumulated, but José Tavares da Costa, 47, left Librão, in the municipality of Santa Cruz, to cultivate the land of the dam reservoir, still counting only on rainwater. .

José Tavares said he was more enthusiastic about the rains that fell in September, he uses it to cultivate sugar cane, which he will be able to harvest within 10 months, for the production of brandy, traditionally known as grog. in Cape Verde.

“We hope that God will give us one or two more rains so that the dam fills up, to make us happier,” asked the farmer, who this year will no longer sow corn, because of the devastating caterpillar that invades the trees. cultures.

“It doesn’t pay off,” the farmer noted, discouraged, indicating that in many areas the cornfield has already been devoured and the authorities are unable to control the plague in all parts of Santiago Island.

The dam, which directly benefits the municipality of Santa Cruz, is 153 meters long, 26 meters high and has the capacity to hold 1.7 million cubic meters of water, used by more than 200 farmers, most of them in downstream, in the basin. Ribeira Seca river basin.

the platform to start your own video subscription