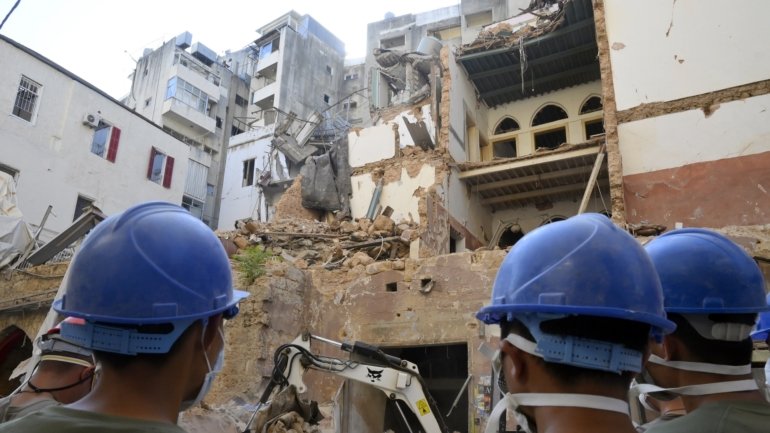 Dozens of people marked this Sunday, in front of the ruins of the port of Beirut, the two months of the explosion in the Lebanese capital which caused the death of 193 people and left around 6,500 injured.

Shortly after 6:00 p.m. (3:00 p.m. GMT), at the exact moment of the explosion, dozens of white balloons with the names of the victims inscribed were launched into the sky from an avenue overlooking the ruins of the port, he said. reported. the French agency France Presse.

Several Lebanese songs were played on loudspeakers, including the song “Li Beirut”, by Lebanese Fairouz, one of the most influential singers in the Arab world in the 1960s and 1970s.

Some of those present held portraits of the victims, momentarily blocking the road where the ceremony was taking place.

Residents also took the opportunity to express their anger at an investigation they consider contaminated and at the passivity of the Lebanese leaders, reported the French agency France Presse.

“Is it too much to ask to know who committed this crime against humanity?” Asks, indignantly, Samia, mother of nine-year-old twins, who lost her husband who worked in the port.

Salwa, who lost her uncle, also a port official, stressed that “all those involved and responsible for this explosion, this disaster, must be punished”.

Nearly 3,000 tons of ammonium nitrate stored in the port of Beirut exploded on August 4, killing 193 people, injuring around 6,500 and causing damage worth millions of euros.

French President Emmanuel Macron has pressured Lebanese politicians to negotiate a stable political solution so that they can adopt urgent reforms.

But despite French support, Adib faced several obstacles on the national political scene, with the country’s main Shiite groups, Hezbollah and Amal, demanding to keep the financial portfolio in the new government.

Hezbollah and Amal insist on appointing the Shiite ministers of the new executive, having condemned the formation of the executive without its consultation.

In addition to the political deadlock, Lebanon is plunged into a serious economic crisis, considered the worst in the country’s modern history, as it did not pay its foreign debt for the first time, has a local currency s collapsing and witnessed rising inflation, poverty and unemployment.

The link to the Islamist scene is checked: Firearms found during surveys of the whole city of Berlin – economy

He should have talks in Berlin: German ambassador leaves Belarus – politics