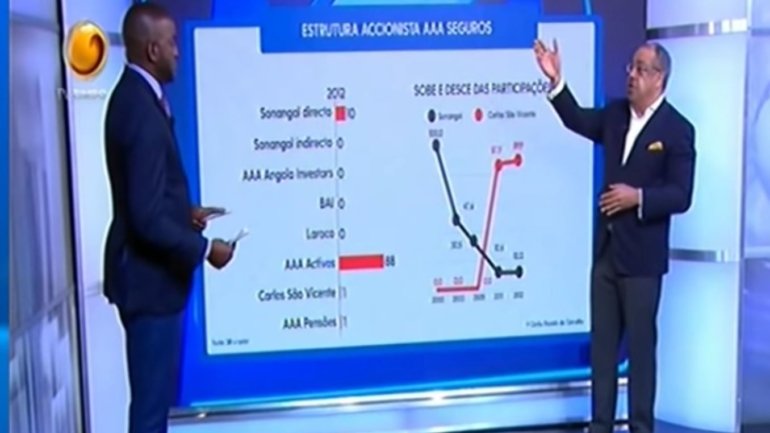 This is the first case of its kind known during João Lourenço’s tenure: TV Zimbo, which entered the Angolan state sphere two months ago, did not transmit the “Direct to the Point” column of the journalist Carlos Rosado de Carvalho who addressed the controversial case of the leader. Office of the President. According to a TVI report, Edeltrudes Costa’s company has benefited from multi-million dollar contracts with the state.

The Angolan Journalists Union (SJA), in a statement released on Monday, to which the Observer had access, considers it an “act of censorship”. The complaint was filed on Saturday by Carlos Rosado de Carvalho on Twitter. The economist – and a new member of the Economic and Social Council of Angola, by João Lourenço – explained that after television told him the topic was “the Edeltrudes Costa affair” he had received Zimbo’s management commission replied that “it was not opportune”, asking “to schedule another”.

END POINT DIRECT TO POINT
“The Edeltrudes Costa Affair” was the theme of Saturday’s EDUCATIONAL GUIDANCE. Friday TV Zimbo told me that the topic “was not relevant”, asking “to schedule another”. I obviously did not accept it.
Thank you very much for the audience. We are together pic.twitter.com/BjjaimcL85

“It is nothing more than an act of censorship,” Carlos Rosado de Carvalho told The Observer, adding that they maintained that they were protecting him since he was now an adviser. “I told them that had nothing to do with it and that viewers deserved a justification for the show not to go on, so if they didn’t, I would do it myself.”

When the column was published in the 8 a.m. Saturday newspaper, the pivot invoked technical reasons for it not to pass, referring only to the name of the journalist who, along with Carlos Rosado de Carvalho, made the Direct to the Point, Kussy Eugénio. The economist therefore decided to communicate on his social networks what had happened, a gesture that the Union of Journalists “congratulated for the courage to refuse and denounce the censorship”.

Paulo Julião, coordinator of Zimbo’s management committee, denies any act of censorship in statements to the Observer, claiming that it was an act of “editorial sovereignty”. The “reporter wanted to present the case in a different way from what was being broadcast by the media and which was not favorable to Zimbo’s image.” In other words, it was “a non-journalistic and impartial approach” which, according to Paulo Julião, even “could appear” favorable to Edeltrudes Costa.

The SJA argues that the suspicions hanging over the head of the office of the President of the Republic are “in the public interest” and asserts that the reason given by the Zimbo management committee for the decision is “deplorable”.

Carlos Rosado de Carvalho does not believe that the orders have come from the “highest level” thinking that it is yet another case of “self-censorship of the board of directors which puts itself in the place of the president”. However, two days have passed and the subject has not turned back. If this happens, the journalist who on social networks announced a “point to Direto ao Ponto”, says he is available to continue collaborating with Zimbo, as long as the section on Edeltrudes Costa is passed.

João Lourenço’s chief of staff was in the eyes of the opposition and was even at the origin of a demonstration which, the very day Carlos Rosado de Carvalho was going to dissect the affair, took around a hundred young people in the streets of Luanda where they demanded the resignation of Edeltrudes Costa.

After the Expresso newspaper reported in February that the former minister of state and chief of staff of José Eduardo dos Santos had received 15 million euros of unexplained origin, a TVI investigation in September revealed that a consultant (EMFC) of Edeltrudes Costa would be favored in the contracts with the State for the modernization of Angolan airports.

In the statement, SJA argues that “the act of the TV Zimbo board of directors clearly contradicts the promises of the Minister of Telecommunications and Media to keep the editorial line of the channel unchanged” and other “bodies transferred to the state “.

The union refers to Zimbo TV, O País newspaper, Mais radio and Palanca TV and Rádio Global, which were owned by men linked to the former Angolan president. The first three belonged to Media Nova, a group belonging to Generals Kopelipa and Dino and former vice-president Manuel Vicente, and the last two to Manuel Rabelais, Minister of Communication of José Eduardo dos Santos.

These media were broadcast as part of the anti-corruption plan – according to the attorney general’s office, they were created with public funds. The national asset recovery service then handed them over to the Ministry of Telecommunications, Information Technology and Social Communication, which appointed management commissions.

Terrorist attack in Vienna: 18 searches so far and 14 arrests after the attack – political

Checking the facts. Argentina is the second country with the highest number of deaths per 100,000 inhabitants? – Observer