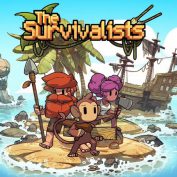 The Survivalists was developed by the famous Studio Team 17 (to whom we owe the legendary Alien Breed and Project-X) and is the latest innovation from Apple Arcade. This crafting and survival game is about building your own little paradise on an island where more or less recommendable creatures live. Robinson Crusoe here we are! The monkeys surprise the allies and can help you set up and monitor your camp. And of course we mustn’t forget to reclaim resources for building his cute little house.

There is no shortage of enemies on the island, as are the special quests. Who knows, maybe we will discover a legendary sword or some hidden treasure? The Survivalists was developed on the same basis as the Escapists series (by the same developer) and promises long hours of play to those who stick to the concept. Note that The Survivalists is the 137th game in the Apple Arcade subscription service.