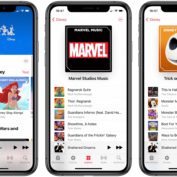 Disney invites itself a little more to Apple Music today. Mickey’s group announces the immediate availability of 30+ playlists of music from Disney, Marvel, Pixar and Star Wars films. There are also the original tapes and radio stations.

In their press release, the group said that the content highlighted here will be updated regularly on Apple Music. Since it’s October, special emphasis is placed on the music that might be played on the occasion of Halloween. A special playlist is now available.

A Disney Hits radio station is also available. She plays popular music from different universes. The station is hosted by Sofia Carson, an American actress who has starred in particular in the Descendants films that were shown on the Disney Channel. There will also be interviews with artists who helped create music for the films. Alan Menken, Christina Aguilera, Auli’i Cravalho, Jodi Benson and Paige O’Hara will be the first guests.

Apple and Disney seem to be in love right now. A few days ago, Disney films appeared in 4K in the iTunes Store and in the Apple TV app. At least that’s the case in some countries like the US and Canada.

Bloodstained: Ritual of the Night: The Castlevania-esque has a release date for iOS (trailer + preview)