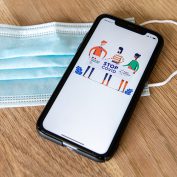 Emmanuel Macron has just announced the arrival of Tous Anti-Covid, a new mobile application that will succeed StopCovid. It’s always for the fight against Covid-19.

“StopCovid did not work,” confirmed the President of the Republic on October 14 in a television interview. He said the application was “downloaded much less than our neighbors” while specifying that “no one managed to turn it into an alarm tool”. There are millions of downloads for the local StopCovid in the UK.

This is where Tous Anti-Covid comes into play. It will be available for download on October 22nd. As Emmanuel Macron states, “It will be an application that has information: how does the virus circulate where you are, where the points to be tested are, and track your cases a little.” The aim is to better inform the French with more general and local information. This point is important, according to the President, because it makes you want to learn.

Another element of Tous Anti-Covid is the presence of instructions for use. This is where the French learn when to use the application first. Restaurants, bars, friends’ houses, such as Emmanuel Macron’s examples.

Tous Anti-Covid will also serve as a tool for restaurateurs and the entire profession. It will be “a tool to alert, to track”. This makes it possible “to identify, track and prevent the sources of contamination”.

Emmanuel Macron closed the motion stating that we must protect “by being very strict during the seven days of isolation if you have the virus, even if you have no symptoms”.

StopCovid in its current form has been installed more than 2.6 million times since the beginning of June, significantly fewer than the UK and German apps, which were downloaded 16 and 18 million times respectively. According to the government last week, only 7,969 people said they were positive and 472 notifications were sent to potential contact cases.

Why is Google rewriting the meta description tag?

US Presidential Election: Joe Biden is more than just not Trump politics

Heavy fighting in the Caucasus: half of the inhabitants of Nagorno-Karabakh are on the run – politics