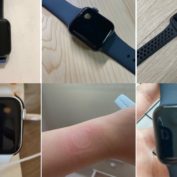 The Apple Watch SE has recently become available and has had some overheating issues with some users. They bought the smartwatch from Apple and discovered the issues just hours or days after first using it.

There are at least six testimonials, and interestingly enough, all users are in South Korea. The Apple Watch SE has started to heat up and function. A yellow stain also appeared in the upper right corner of the screen.

One user says he slept with the Apple Watch on his wrist. When he woke up, he felt that his wrist was warm. He immediately took off the watch and noticed a red mark on his wrist. The screen was no longer lit, but the clock was still functional. In fact, it was showing up in the Find Apple application.

Of the six Koreans involved, the first and second were able to receive a refund from Apple. The third is waiting for an answer from Apple and the fourth was able to make a replacement. There is no information for the remaining two.

A batch of the Apple Watch SE may be defective and have been sent to South Korea. Other users may experience this problem in the next few weeks. Apple has not yet made a public comment.

2020 US election: Biden sees himself on his way to victory, Trump speaks of electoral fraud – politics

5G is available from Bouygues Telecom: here are the 20 cities covered