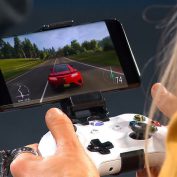 You can now play Xbox One games on iPhone or iPad. There was a beta version last month and it’s now available to everyone as a stable version. Just go through the Xbox app for iOS.

The new feature lets you stream the games on your Xbox One to your iPhone or iPad. It is only possible to access the games installed on the console. It’s different from xCloud, Microsoft’s cloud gaming service. This is server based and allows access to dozens of games over a simple internet connection.

Remote play is available via WiFi as well as 4G or 5G. Of course, the gaming experience strongly depends on the internet speed and (especially) on the stability of the connection. It is therefore preferable (if possible) to play over WiFi instead of a cellular connection.

The Xbox app can be downloaded for free from the App Store for iPhone and iPad. The update also includes the ability to set up new consoles and queued games, view and share game clips and screenshots, and enable group chat with your friends on the devices.

Those with a PlayStation 4 are already familiar with the ability to play remotely using the iPhone or iPad. All you have to do is use the PS Remote Play app. The system for streaming games from PlayStation 4 to iOS devices has been available for over a year.

SURE, solidarity with workers in Europe becomes reality

The Portuguese have been more successful than others in the fight against the virus, says Commission President – Observer