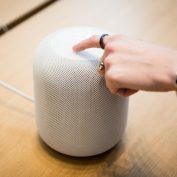 In addition to iOS 14.1 for iPhone and iPadOS 14.1 for iPad, Apple is also offering update 14.1 for the HomePod. It adds the intercom functionality and has improvements for Siri.

Here’s the news from Apple:

Set up your Apple ID, Apple Music content, Siri, and Wi-Fi settings and transfer them to HomePod mini automatically.

Siri’s suggestions now appear in maps when you ask Siri for location information. Web searches made on your HomePod can be sent from the HomePod to your iPhone. Siri can now mute your alarms, timers, and media through HomePod speakers. Support for speech recognition of various home users for the Podcasts app.

Other improvements and fixes

Add music to alarms and activate your favorite song, playlist or radio station from Apple Music. Addresses an issue that could cause audio to be out of sync with stereo pairs. Better reliability when using Siri to control multiple speakers. Optimized Siri performance.

To download the HomePod 14.1 update, open the Home app on your iPhone and tap the Home icon in the top left. Then go to Home Settings> Software Update.

Donald Trump or Joe Biden: Where the US Presidential Election Will Be Decided – Politics