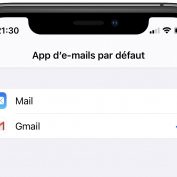 In any case, iOS 14 has application management issues by default. Users can change Safari and Mail to set other default apps. However, the setting is reset depending on the case.

It all started in September with iOS 14. Users had found that Safari and Mail reverted to standard applications after restarting the iPhone. Apple corrected the recording with iOS 14.0.1. But today a similar error occurred.

iOS 14 resets Safari and Mail as the default apps when an update is applied from the App Store. For example, you’re using Chrome instead of Safari, and a Chrome update is available. You refresh Chrome and Safari reverts to the default internet browser. It shouldn’t be like that. The setting should stay on Chrome (or another app, depending on your choice).

The following video shows the problem with Gmail and Apple’s Mail app. After updating Gmail, Mail will revert to the default email app.

This bug still persists with iOS 14.1, the update available since yesterday. We envision that Apple will soon offer iOS 14.1.1 to fix this and other bugs.

Northgard: The management game in the Viking universe is adapted for the iPhone (trailer)