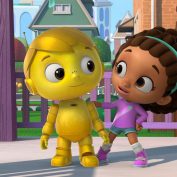 Doug Unplugs (or Doug, the curious robot in French) is an animated series for children produced by Dreamworks Animation Studio. This toddler series will be included in the (already well-shipped) Apple TV + programs for children. Each episode will be an opportunity to remember the mantra of the right to be different: Doug is a little robot who claims his right to live among people instead of being viewed as a simple machine. The topic is therefore quite deep a priori (it is also that of AstroBoy or AI), but the treatment remains open on the surface, as the first trailer shows. Even the realization remains incomplete, far from the quality standards of Dreamworks (to which we owe the dragon trilogy anyway). Doug, the curious robot, will be available on Apple TV + November 13th.