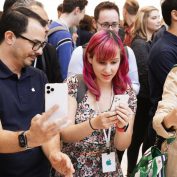 One billion people around the world use an iPhone today. According to Neil Cybart, an analyst at Above Avalon, that symbolic milestone was reached last month.

“Competitors continue to shamelessly copy the iPhone or are at least heavily influenced by the iPhone,” says the analyst. He adds that the priorities for Apple are “finding ways to keep the device at the center of people’s lives while realizing the paradigm shift that wearable products bring”.

It is important not to confuse iPhone sales with the number used. Apple sold its billionth iPhone in 2016. However, all of the iPhones sold during that period were not used (some were out of service, recycled, etc.). Today it is actually about a billion iPhones used at the same time.

In addition, Neil Cybart estimates that the number of new iPhone users has steadily decreased since 2007. At the same time, the number of people who own an iPhone and have switched to a new model has increased dramatically. . According to the analyst, Apple only attracts around 20 to 30 million new customers each year. That’s less than 20% of iPhone sales for fiscal 2020, its lowest ever.

According to the analyst, Apple is expected to sell around 240 million iPhones in fiscal 2021. This would be an increase of 4% compared to the record year 2015.