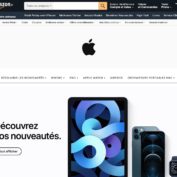 Apple and Amazon have been friends since the end of 2018. Under a contract, Amazon can officially sell iPhones and other Apple products. So far there have only been third-party providers. For Germany, however, the agreement between the two groups is a problem, hence an investigation.

The problem for Germany is that third-party providers are completely excluded from Apple products. Only Amazon can sell iPhone, iPad, Mac or Apple Watch. The Bundeskartellamt wonders about this. So she started interviewing Apple and Amazon to find out more behind the scenes of their business.

“Trademark agreements can help protect against product piracy,” said the German authority. “However, these measures must be proportionate to comply with antitrust rules and must not lead to the elimination of competition,” she added.

Amazon told Bloomberg that sales permits will never be removed without a valid reason. The online retailer adds that it is investing heavily to combat the illegal distribution of goods. He is now working with the German authorities to move the file forward.

For its part, Apple speaks of security. “The safety of our customers is our top priority. Our teams are constantly working with law enforcement, resellers, and e-commerce sites around the world to remove counterfeit products from the market.”

The agreement between Amazon and Apple also disrupts other countries

This is not the first time the agreement between the two companies has raised questions. Italy launched a similar investigation into sales of Apple and Beats products this summer. In addition, Apple and Amazon are among the technology companies that are approached in Europe for their practices. These are sometimes viewed as unfair to limit competition.

Orange denies the takeover of Atos

PSD requests clarifications from the Minister of Internal Administration. “This is not the first flight of migrants”

What tasks can you do with accounting software?

Islamism in France and Austria: “Not Naive, But Blind” – Politics