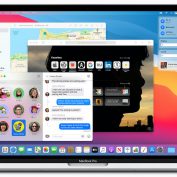 Apple is now offering the first public beta of macOS 11.0.1. It’s coming 24 hours after the developer beta. This version mainly focuses on bug fixes. As an aside, it should be noted that it is available as long as macOS Big Sur is not yet in a stable version.

With your Mac set up to receive macOS public betas, go to System Preferences> Software Update. The first beta of macOS 11.0.1 is displayed.

If not and you’re interested, go to beta.apple.com. Sign in with your Apple ID and follow the instructions to get your Mac to the beta channel.

This version is primarily an opportunity to have new wallpapers. They are similar to those on the iPhone with iOS 14.2 (currently in beta). Here is every wallpaper:

Apple doesn’t say when the final version of macOS 11.0.1 will be available yet. For macOS Big Sur, Apple is still talking about an autumn version.

The usefulness of the virus in higher education | Opinion

Around 6,000 migrants are already in the new Lesvos camp – Observe

Trump tested positive for the coronavirus: how Trump’s infection with the virus affects the election campaign – politics