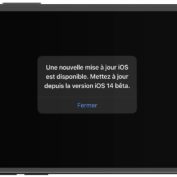 People who have installed the latest beta version of iOS 14 will receive a notification that appears in the exact center of the screen. The iPhone will tell them that an update is available and needs to be updated. However, the update in question does not exist.

The message reads: “A new iOS update is available. Update from iOS 14 Beta ”.

This scenario is strictly identical to what happened two years ago with the iOS 12 beta phase. The same notification was shown in the center of the screen and was also on the weekend. Apple proposed a new beta at the end of the day to fix this bug. We can therefore expect a Beta 5 of iOS 14.2 for later. Apple doesn’t say anything on this yet.

According to user feedback, this notification appeared a few days ago with the iOS 14.2 beta. It seems to be showing up in more people today.

There isn’t much to do at the moment. When the notification appears, all you can do is click Close. What better way to end the week than closing a popup regularly? We will now have to wait for a new beta from Apple to correct the situation.

iPhone 12 and 12 Pro: Here are the different colors in photos