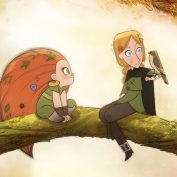 The promising Wolfwalkers are revealed again in the Legendary Prologue Trailer. This third trailer looks back at the origins of the legend of the wolf wanderers, those half-human, half-wolf-like creatures endowed with almost magical powers. But is that just a legend? Here we find the characteristic feature of the works of Tomm Moore (The Song of the Sea), these lively illustrations, whose level of detail and aesthetics are often reminiscent of the illuminations of the Middle Ages. The aesthetics of this silversmith combine here with a quality of animation that cannot envy the Disney of the good times, for a visual result that sometimes borders on the unprecedented. The script is certainly a little less overwhelming (a story of friendship between a Wolfrunner and a teenage girl), but the realization should largely win the play. Wolfwalker will be available on Apple TV + on December 11th.

Questions of the day: New construction in Berlin is becoming more expensive and vaccine policy is progressing

The US faces a possible change of power: in the case of Biden’s victory, there is first relief, then disappointment – politics

Minister of Finance in charge: “The case of Wirecard is Causa Olaf Scholz” – the economy