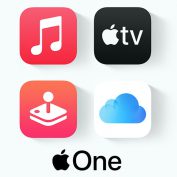 So far, Apple has been offering up to 2TB of iCloud storage for $ 9.99 / month. Now it is possible to have up to 4 TB of storage space. But for that you need to use Apple One.

Apple One is the package that brings Apple’s services together. We can find Apple Music, Apple TV +, Apple Arcade and iCloud Storage. The price is € 14.95 / month for one person or € 19.95 / month for a family. The offer has only been available for a few hours.

With the individual plan for Apple One, Apple offers 50 GB of storage space on iCloud. With the family plan, it’s 200 GB. But there’s also a Premier plan that adds Apple Fitness +, Apple News +, and 2TB of storage. It’s $ 29.95 / month for US, Canada, UK, and Australia only.

So those who take the Premier Pack with Apple One will have 2TB of storage in iCloud. You can add an extra 2TB by paying the same price as now. This will allow them to have 4TB of iCloud storage in total, Apple announced.

You got it: it’s only possible to have 4TB of iCloud storage in the US, Canada, UK, and Australia. Apple isn’t saying yet whether other countries that don’t have the Premier offering will be able to use it later.

Apple also mentions the case of users who have two Apple accounts on the same device. This is a “generic” Apple account and a dedicated iCloud account. Those in this situation cannot accumulate memory. The memory with Apple One is taken into account here.

A tool for creating and exporting graphics on a site

Long Way Up (Apple TV +): A new behind the scenes video

Attack in Vienna targeted before lockdown: the act exudes the spirit of “Islamic State” politics